India is a multilingual country. Three language formula was introduced in order that citizens develop knowledge of several languages simultaneously in order to promote national homogeneity 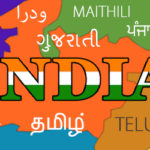 India has 22 languages recognized by the Constitution. These are termed as ‘National Languages’ (Rashtriya Bhasha). But Hindi and English are designated as ‘Official Languages’ (Raj Bhasha), which means the Central Government’s work is carried out in Hindi and English. State governments will conduct their official work in respective ‘State’s Official Languages’. Some states have a second official language too.
Officially there are 122 languages. But People’s Linguistics Survey of India has identified 780 languages, of which 50 became extinct.
Ethnologue, an organization studying languages across the world, says India is home to 461 languages, of which 14 have been reported as extinct.
The Census of India 1991 listed 1,576 mother tongues with separate grammatical structures and 1,796 speech varieties. Many of them are merely oral languages (Boli) with no script. They do not have written grammar, nor their vocabulary is compiled in dictionary.
But, several languages are dying and are set to die as education, market needs and administration can be conducted only in those languages that are developed, have set rules for grammar, phonetics, script and elaborate vocabulary. Digitization has added one more feature to this list. The people opt for those languages in which best education is available, administrative work is done, are popularized by movies and the ones that digitize fast. The growth of those national languages that facilitated these, has been phenomenal during the last seven decades.
But the case of English in India has been an exception. It has become more popular after the British left. One may wish to ask why? Because the best schools impart education through English. Second, it is the language of the influential people in India. Third, one needed to learn, know, and develop expertise in this language in order to interact across all sections of people within India. It is also the language of elite consensus. Fourth, it was considered the language of advanced ideas in science, technology, law and humanities. Those who need to access them also need to develop felicity in English. Fifth, it is the best medium of legislation. Sixth, it boosts the prospects of going abroad for higher education, employment, marriage (especially for girls), and migration. Fifth, cosmopolitan nature of English language and academic environment provides opportunities for all ideas to be propagated, heard and accepted. But these were not the only reasons why English has an upper hand. English was the first language to be digitized. In 1990, it made up 90% of the digitized content that existed then. But the trend has undergone a change since then. Now English’s share is at 30% as French, German, Spanish and Chinese have increased their share. Chinese has climbed the scale very rapidly. Its use has gone up by 1,277% since 2001.
Of the 6,000 languages that are currently used across the world, only the top10% occupy 82% of the cyberspace. Linguists say only 5% of all the living languages are digitally ‘ascending’. About 250 languages are well established online. The other 6,700 languages have only a marginal presence.
India is a multilingual country. Three language formula was introduced in order that citizens develop knowledge of several languages simultaneously in order to promote national homogeneity. English provides the icing on the cake.