By A Staff Writer
Bangalore: 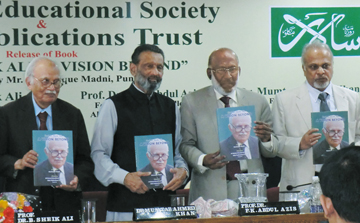 Prof. B. Sheik Ali – A Vision Beyond, a book compiled by Mushtaque Madni was released here on November 10, by Prof. Dr. Abdul Azis, former vice-chancellor of Cochin University of Science and Technology and Aligarh Muslim University. The book has been published by Salar Publications Trust. The first copy was received by Dr. Mumtaz Ahmed Khan, founder of the Al-Ameen Educational Society. The book brings together the views and opinion about Dr. Sheik Ali, former vice chancellor of Mangalore and Goa Universities and a noted social worker from the city of Mysore where he has founded and administers 15 educational institutions. Releasing the book, Dr. Azis pointed out that Muslim representation in public employment and public life has declined miserably pointing out that none among the 20 vice chancellors in the state’s varsities was from the community. Azis asked as to what happened to Muslims after Sir Syed Ahmed Khan founded the first Muslim college (which later became AMU) and why no university could come up in the next eight decades. Prof. Sheik Ali, who turned 87 years old on the same day, said three impulses of the Western civilization”possessive, competitive and creative”were worth emulating for the Muslims. Atheeq Ahmed, president, Salar Publications Trust, who read out a citation at the occasion, said Dr. Sheik Ali’s life is a beacon of guidance for today’s generation. Dr. Mumtaz Ahmed Khan likened him to a legend and said there are formidable odds in founding any institutions and said the bad days of Muslims were behind them. He said the quality of an activist lies in overcoming the odds. J. Shafiulla, Hony Treasurer, Al-Ameen Society welcomed the gathering. Subhan Shariff, Joint Secretary of the Society proposed a vote of thanks. Azam Shahid compered the programme. The book by the Pune based author brings together opinions from people like former Governor of Karnataka, Khursheed Alam Khan, ex-VC of Kuvempu University Dr. M. R. Ganjendragadkar, current VC of Pondicherry University, Prof. Jalees Tareen Khan, Prof. S. N. Hegde, besides leading lights of Al-Ameen, K. Rahman Khan, Mumtaz Ahmed Khan and Abdul Rahman Kamaruddin etc. It runs into 150 pages and priced at Rs. 150.