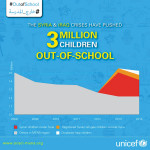 Nearly 1 in 4 children in the Middle East and North Africa is either out of school or at risk of dropping out, the United Nations said in a new report highlighting the disruptive impact of war on a region where education rates had been steadily improving for years. More than 15 million children are currently out of school, and another 6 million are believed to be “at high risk” of dropping out, UNICEF and UNESCO said in a joint study on education in 20 countries across the Middle East and North Africa. The 15 million figure includes the more than 3 million Syrian and Iraqi children who are out of school as a direct result of the violence roiling their countries.
“As the violence expands, millions more are at risk of becoming a ‘lost generation,’ deprived of the knowledge and skills needed to be successful adults,” the report said. Over the past decade, Middle Eastern governments have managed to slash out-of-school rates by over 40 percent. That progress, however, has markedly slowed in recent years, the report found. Part of the explanation is that certain factors, including poverty and conservative attitudes towards women, are persistent. Girls are still 25 percent more likely to be deprived of schooling than boys, the report found. But the spate of armed conflicts engulfing Syria, Iraq, Libya and Yemen have severely complicated government efforts. In Syria, which once had one of the highest enrollment rates in the Middle East, nearly half the people have been displaced from their homes. “You have child refugees, children displaced within their country and another group who are in their own homes but don’t have access to their school because it’s been bombed or destroyed,” said Juliette Touma, a spokeswoman for UNICEF in Beirut. “So we need to support not only Syrians, but also communities in Lebanon, Jordan, Turkey and Egypt that have been strained for over four years,” Touma said. “Low levels of funding emerge as the most critical bottleneck for reaching conflict-affected children with education,” the report concluded. “Unless we tackle this problem, through prioritizing investment in education, we might come to a point where we have lost a generation not just in Syria and Iraq but all over the region,” Touma said. (Al Jazeera)