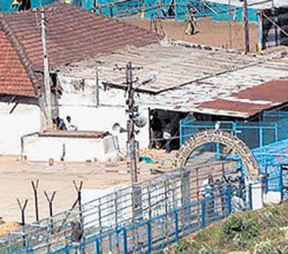 Bangalore: The BJP Government’s case to disprove the existence of a mosque at the Baba Budhangiri Shrine Complex near Chikmagalur received a setback with defendant Syed Ghouse Shakhadri, the hereditary custodian of the shrine, producing historical evidence of a mosque at the site.
The cave shrine on the Baba Budhangiri Hills has been under dispute with a few extreme right organizations laying claim to it as a Hindu shrine under the name of Dattatreya Peetha. The shrine has however been a centre of devotion for both Hindus as well as Muslims for centuries. The cave shrine houses the mausoleum of Baba Budhan who is said to have introduced coffee plantations in Western Ghats of Karnataka, having brought the seeds from Yemen. Curiously, one of the popular varieties of coffee grown in these districts is Coffea arabica.
Shakhadri has produced before the Supreme Court an official letter dated June 1950 from the then Deputy Commissioner of Chikmagalur K. Mohamed Ahmed addressed to S. Ananda Rao, Amaldar of Chimakgalur asking him to send immediately the records pertaining to the renovation of “masjid” at Dattatreya Peetha in Baba Budhangiri Hills. The Karnataka Government had contended that the structure was a ‘prayer hall’ and not a mosque.
Mr. Shakhadri has also furnished before the court another record, an 1830 statement, which carries contents of an inscription of 1830 installed by his ancestors, which clearly refer to the place of the inscription as “on a wall near the masjid” in Bababudangiri Hills. Shakhadri told the media that the “State Government was clearly trying to mislead the court by giving false information”.
According to Shakhadri, the District administration has always maintained that there exists a mosque within the cave shrine and records of proceedings of meetings by Tahsildar even show its dimensions as 78 feet by 40 feet. Even State Electricity Boards’ electrification records refer to a structure on the premises as “dargah mosque”.
Shakhadri has prayed that he should be allowed to enter the sanctum sanctorum of the shrine to put green cloth on the tomb. “I don’t know which law restricts a person from visiting the graves of his forefathers,” he said.
Why the same yard stick has not applied in the case of Hazrath BabaBudan Darga by Wakf Board when it had in its office records to prove it is an inam to the Darga. But as on date, darga has all the records to prove it is wakf, and documents are Revenue, Survey ,Government Proceeding, sannads and Grants to the extent of 7000 acres. Readers can get information on Government Archival Website Type Dattatripit-Bababudan darga. Note the spelling of of dattatripit. Which is mis-spelt all the time.
The Mysore Gazette of 1898 published by Government of India Resident Chief Court had said: “Pilgrims traveling by road or by train to attend the annual oors (sic) at Dattatri pit known as the cave of Baba Budan, on the Baba Budan hills will be subjected to medical examination.” This in itself is an official acknowledgement of the shrine’s status as a Dargah where Urs (or oors as in government terminology then) is held. Curiously, Prof. Mumtaz Ali Khan, who was the Minister for Minority Affairs and Wakfs in 2010 when the BJP Government had filed a special leave petition in the Supreme Court seeking permission to perform puja, did not raise objection. (He being a Yeddyurappa loyalist, is now in the newly-formed Karnataka Janata Party).
Even according to the Archaeological Department report 1932, presence of a masjid and several graves has been recorded. A recently recovered sannad issued by the Mysore Maharaja dated February 13, 1812 reveals existence of another mosque, graves with tombs in inam suraguppa. As on date, suraguppa stands abolished under Inams Abolishing Act.