New Delhi: Muslim scholars from different parts of India gathered in the University of Delhi to deliberate methods of inter-faith dialogue in Shariah. The three-day conference from April 22-24, in the University of Delhi campus, was jointly organised by the Islamic Fiqh Academy, Dept of Arabic of Delhi University, and Islamic Educational, Scientific and Cultural Organization (ISESCO) headquartered in Morocco. Over 34 papers in English and Arabic were presented on the second day of the conference. The papers highlighted foundation of inter-faith dialogues in Quran and Hadith, basis of dialogue in Shariah, different ways of inter-faith communication. Scholars commented that the Quran has provided conversations that took place between prophets and their nations. Scholars drew three principles of inter 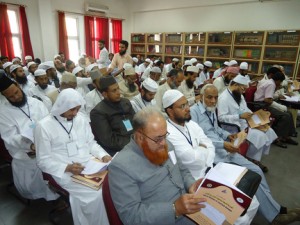