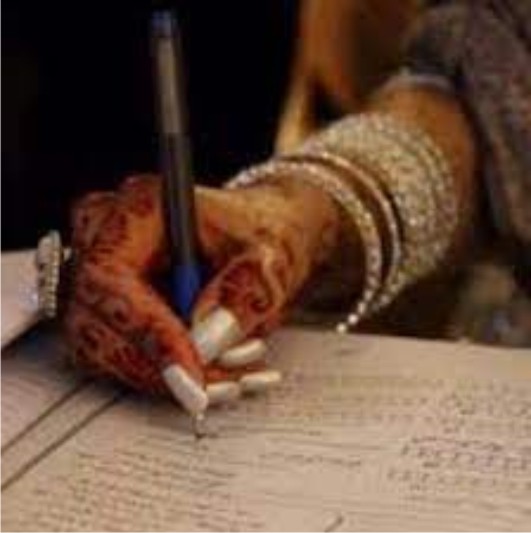 ‘follow Prophet’s Example in Nikah and Other Family Matters’

New Delhi: Maulana Syed Mohammad Rabey Hasni Nadwi, president of All India Muslim Personal Law Board, urged the Muslims to follow the Prophet’s example in nikah and other family affairs. Addressing the All India Consultative Meeting on Masnun Nikah (marriage), Maulana Rabey Nadwi said Islam is a complete religion that guides us in all spheres of life, so Muslims should follow their social affairs by following the Shari’ah.

The consultative meeting was organized by the Muslim Personal Law Board’s Islah-e- MashraCommittee on September 9. Presiding the meeting, Maulana Nadwi lamented that Muslims had limited religion to worship only and neglected social affairs. He said dowry is being traded at weddings, and extravagant expenditure on wedding ceremonies brings disgrace to Islam and Islamic Sharia. He advised the community to refrain from such ugly rituals and customs on marriage and perform marriage according to Sunnah and Sharia. The Board President said it is heartening to note that the Muslim Personal Law Board strives to make marriage easier by running an “Asaan And Masnun Nikah Campaign.” He appealed to scholars and social workers to take this campaign forward and expressed the hope that it would positively change society.

The online meeting began with the recitation of the Qur’an. In the beginning, Maulana Muhammad Umreen Mahfooz Rahmani, Secretary of All India Muslim Personal Labor Board and All India Convener of Islah-e- Mashra Committee, asked the community to follow the Islamic guidelines regarding marriage. He underlined the negative fallouts of ignoring Islamic teachings in marriage and other affairs, saying social evils taking root in the society such as a large number of Muslim girls are sitting unmarried in their homes.,

He said that the Board had launched an easy marriage campaign across the country in March this year. Because of this campaign, I was able to perform dozens of marriages with simplicity.
In his keynote address, Maulana Khalid Saifullah Rahmani, Acting General Secretary of the Board, said that it should be a matter of concern that the Muslim girls are marrying non-Muslim boys leading them towards apostasy. He said scholars and women could play an essential role in reforming society.

Maulana Syed Arshad Madani, President of Jamiat Ulema-i-Hind and a member of the Board’s Working Committee, said that a committee of influential people should be formed to make the easy marriage campaign a success. He also said that the social evils that crept in marriage ceremonies could not be wiped out through a few meetings, speeches, and articles. He added that it requires a constant and systematic struggle, and all people should work hard to take this movement forward.

The meeting was attended by representatives of different sects and schools of thought, leaders of national parties and organizations, and eminent country scholars.

Maulana Asghar Ali Imam Mehdi Salafi, chief of Jamiat Al Hadees, said it is the need of the hour to reform society. He noted that Markazi Jamiat-e-Ahl-e-Hadith is participating in this campaign. He also suggested that a Mohalla Sudhar Committee be formed under the supervision of the Imam of each mosque.

Syed Saadatullah Hussaini, Ameer of Jamaat-e-Islami Hind, said social pressure should be created to facilitate marriage, and a women’s committee should be formed to educate women. Maulana Abdullah Mughisi suggested that the Qazi invite the bridegroom and some close friends and convince them about the advantages of a simple marriage ceremony. He also said that Milli Council would extend its full support in this regard. Maulana Syed Mustafa Rifai Jilani stressed the need to make nikah simple and easy, and no rituals and customs should be allowed in it.

Dr. Abdul Qadeer, Chairman Shaheen Institutions Bidar, said that a community that spends more on marriages than education can never be prosperous. Making marriages easier is anessential need of the hour. He assured me that he would continue to extend his support to take this campaign forward in Karnataka. Prominent Shia Khateeb Maulana Ali Asghar Haideri said that the joint efforts of people of all sects and schools of thought to facilitate simple marriage would result in positive change. Maulana Khalil-ur-Rehman Sajjad Nomani sent his video message as he was traveling. Instead of wasting money on marriage, he said that Muslims should educate their children and protect their health. He said there was a need to create awareness among Muslims to spend money for higher causes,not waste their wealth in wasteful affairs. In his message, Maulana Fakhruddin Ashraf (Sajjada Nasheen Kachhocha Sharif and Vice President Board) also stressed making marriage simple.

During the meeting, several resolutions were passed while several scholars and eminent personalities presented written and oral proposals for making this mission successful.

Over 700 scholars from different states and districts attended the online consultation meeting, imams of mosques, leading personalities, prominent social workers and conveners, and members of the Reform Society Committees across the country.