Corruption Perception Index 2017 – Muslim Countries among the Most Corrupt

Islamic Voice 0 March, 2018 12:00 am
Kannada book on the Prophet Released
Violence in the Name of Cow Vigilantism Must Stop: SC
Church Calls On Christian Journalists To Stand For Truth

Torn by war and conflict and ruled by dictators and despots, Muslim countries fare among the worst performers in matters of ending corruption. 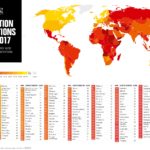 Berlin: Eleven Muslim countries figure among the 20 most corrupt countries in the world. These are Somalia, Syria, Afghanistan, Yemen, Sudan, Libya, Iraq, Turkmenistan, Eritrea, Chad and Tajikistan. Most of these countries are war-torn or conflict-ridden or are ruled by dictators and allow no press freedom and civil society organization i.e., NGOs. Somalia tops the list as the most corrupt while Syria comes third and Yemen and Sudan share the 4th rank. Libya comes next, whereas Iraq is 7th. It is followed by Turkmenistan while Eritrea and Chad jointly share the 9th position. Tajikistan stands at tenth.
This is revealed by the Annual Corruption Perception Index 2017 released by the Transparency International (TI) which has been ranking the nations around the world on the basis of corruption. The index ranks 180 countries and territories by their perceived levels of public sector corruption. According to experts and businesspeople, it uses a scale of 0 to 100, where 0 is highly corrupt and 100 is very clean. This year, the index found that more than two-thirds of countries score below 50, with an average score of 43. Unfortunately, compared to recent years, this poor performance is nothing new.
The first ten ranks are shared by 20 countries and do not list any Muslim country among them. New Zealand and Denmark take the first and second ranks. Finland, Norway and Switzerland share the 3rd rank. They are followed by Singapore and Sweden which are ranked 4th. The UK, Canada, Luxembourg and the Netherlands are pegged at fifth position. Germany comes sixth while the 7th rank is jointly held by Australia, Hong Kong and Iceland. The United States, Austria and Belgium share the 8th rank while Ireland and Japan are ranked 9th and 10th.
India’s ranking slipped down from 79 in 2016 to 81 in 2017. The Corruption Perception Index 2017 also singled out India as one of the “worst offenders” in the Asia-Pacific region. “Philippines, India and the Maldives are among the worst regional offenders in this respect. These countries score high for corruption and have fewer press freedoms and higher numbers of journalist deaths,” it added. China was not doing any better and is ranked 77th. Turkey and Morocco were joint rank-holders with India at 81.
Pakistan and Bangladesh were still worse, with Pakistan standing on 117th rank and Bangladesh on 143rd. Egypt shared its rank with Pakistan. Malaysia and Indonesia were pegged at 62nd and 96th position. Saudi Arabia fared low on the index at 57th position. But Iran was trailing far behind at 130th rank. Most of the Central Asian Muslim States, part of the former Soviet Union, were ranked among the highly corrupt, i.e., between 130 and 170.
TI said on the basis of data that majority of the 180 countries were making little progress in ending corruption. It said the countries that are more corrupt are also unsafe for journalists and activists. It says one journalist is killed every week in a highly corrupt country and activists are also prevented from speaking out against corruption.
(For fuller version log onto: www.transparency.org/news/feature/rampant_corruption_in_arab_states)