The King Faisal Prize for Science in Biology was shared by Professor Vamsi Krishna Mootha from the US and Professor Stephen Philip Jackson from the UK. 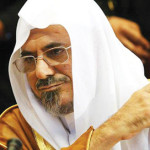 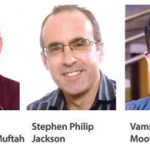 Riyadh: Eight distinguished scholars from various parts of the world, won the prestigious King Faisal Prize in different categories.
The event was held under the patronage of Prince Khaled Al-Faisal, Makkah governor and chairman of the King Faisal Foundation, who delivered the welcome address. The awards were in five categories: Service to Islam, Arabic language and literature, Islamic studies, medicine and science.
The King Faisal International Prize for Service to Islam was awarded to Grand Mosque imam and former Shoura Council Chairman, Saleh bin Humaid. Humaid is a consultant at the Saudi Royal Court, member of the Commission of Senior Scholars and president of the Jeddah-based International Islamic Fiqh Academy.
The prize was awarded in appreciation of his leading role in the International Islamic Fiqh Academy. He has put forth strenuous effort, profound wisdom, deep vision and positive influence in dealing with contemporary fiqh (jurisprudence) issues.
Prof. Abdullah bin Yousif Al-Ghunaim, president of the Kuwaiti Studies and Research Center, was the winner of the King Faisal International Prize for Islamic Studies. It was given to him in recognition of his seminal contributions both as an author and critical editor of original manuscripts of Muslim geographic legacy and his distinguished venture to revive ancient Arabic terms on shapes of the earth’s surface and adapt them to contemporary geography.
The King Faisal International Prize for Arabic Language and Literature was awarded to Prof. Mohammed Al-Ghazawani Muftah from Morocco and Prof. Mohammed Abdul Muttalib Mustafa from Egypt.
Professor Mohammed Muftah is recognized for his distinguished methodical and theoretical endeavors in Arabic language and literature. He has employed modern concepts in analyzing and describing Arabic poetic texts, perceiving them within the context of human culture.
Professor Mohammed Abdul Muttalib is recognized for his important accomplishments in applied analysis of Arabic poetry; he has competently and skillfully coined his analysis of poetic texts with deep knowledge of Arabic culture and insight of contemporary literary and stylistic concepts.

A novel method of analyzing DNA
Professor Han Grrit Brunner and Professor Joris Andre Veltman from the Netherlands shared the King Faisal Prize for Medicine for clinical application of next generation genetics.
Professors Brunner and Veltman were selected as winners in recognition of their prominent role in moving into clinical practice a novel method of analyzing DNA, referred to as next generation sequencing. This has greatly improved the way of identifying genes that cause disease in patients and families suspected of having an inherited disorder. They have also initiated strong international collaboration in both research and diagnostics. They have published widely in outstanding scientific journals and have been recognized by their peers as innovative scientists.
The King Faisal Prize for Science in Biology was shared by Professor Vamsi Krishna Mootha from the US and Professor Stephen Philip Jackson from the UK.
Professor Mootha has used the mitochondrion (the cellular power plant) as a model to identify the link between pivotal molecular factors involved in mitochondrial dysfunction and major human diseases, such as diabetes and other metabolic disorders. His contribution provides a framework for novel diagnostic and therapeutic applications.

Therapeutic products to treat cancer
Professor Stephen Philip Jackson is recognized for his outstanding contribution to defining the link between the basic mechanism of genomic DNA instability and its relationship to cancer. Specifically, he unraveled the salient components of the pathway involved in DNA repair. He is also credited with an innovative approach to bring his findings into tangible therapeutic products to treat cancer.
In his opening address, Prince Khaled said the winners will be presented with the awards in the next two months.
Prince Khaled said that merit and excellence are the criteria for selection. King Faisal Foundation was established in 1976 by the eight sons of the late King Faisal. Each of the five prize categories consists of a certificate, hand-written in Arabic calligraphy summarizing the laureate’s work, a commemorative 24-carat, 200-gram gold medal, uniquely cast for each prize, and a cash award of SR750,000 ($200,000). The co-winners in any category share the monetary grant. n
(arabnews)