Hyderabad, Telengana: A travelling exhibition of pathbreaking Muslim women achievers of the 20th Century rolled into the city recently. Called ‘Pathbreakers’, the invitation for the event had the enigmatic photograph of Tyeba Khedive Jung who was born in 1873 in Hyderabad. Moving away from Hyderabad, she became the first woman from the city who received university education, graduating from the University of Madras in 1894. Tyeba Khedive Jung wrote Anwari Begum in 1905 and she even presided over the annual conference of the Brahmo Samaj.
“I stumbled upon the book Anwari Begum in my mother’s library. Then I realised I have to do something to tell the story about Muslim women who came onto their own at a time when the stereotype was that of a conservative society with many problems,” said Syeda Hameed of Muslim Women’s Forum, the brain behind the exhibition. A small booklet with the profiles of the women was also launched on the occasion. 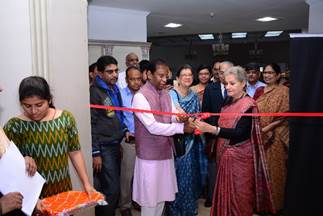