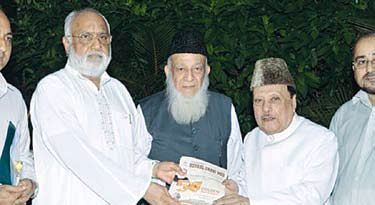 Dr. Hakeem Syed  Khaleefathullah was felicitated here at a public function on completion of 50 years of service to the world of medicine. Prince Nawab Mohammed Abdul Ali, Prince of Arcot was the Chief Guest at the function held at Amir Mahal.
He presented a memento and  honored Dr. Khaleefathullah for his 50 years of service to Unani healthcare, education and research and addressed the gathering. Dr. S.K. Khadri, President, Anjumane- Mufid-e-Ahle-e-Islam and Eastern Medical Association of Southern India was the guest of honour.

A leading practitioner of the Unani medicine, Dr. HakeemKhaleefathullah has been associated practically with every institution working for the teaching, research and advancement of the Unani medicine in India for the last five decades and has contributed enormously to the promotion of this system of therapy in India and abroad. He also founded the Niamath Science Academy in Chennai some three decades ago and has taught and trained at least two generations of Unani doctors by dint of his active stewardship of the Government Unani Medical College in Chennai, a city otherwise least known to be hospitable to any system of medicine other than
Allopathy and Siddha. Dr. Khaleefathullah was the founder director of Central Council of Research in Unani Medicine (CCRUM), a central government body. He is currently its vice president and was also instrumental in the establishment of the National Institute of Unani Medicine (NIUM) in Bangalore. He was elected President of the Central Council of Indian Medicine in 1984 and helped the colleges of Indian systems of medicine getting affiliated to various universities and bringing uniformity in their syllabi and introduction of PG courses. In recognition of the services of his Niamath Science Academy, the Department of AYUSH (Ayurveda, Unani, Siddha and Homeopathy) sanctioned Rs. 2.5 corer for the establishment of a Centre of Excellence in Ilaj bit Tadbeer (Regimental Therapy) to the Academy. Dr. Khaleefathullah was awarded the D.Sc (Doctor of Science) by the MGR Medical University in Chennai in 1998 and was appointed as the Hony. Physician to the President of India. A highly respected figure in Chennai, he has straddled the world of medicine by acquiring degrees in both Allopathy as well as Unani, but devoting himself to the promotion of the latter. He was also associated with several Muslim educational institutions of the city of Chennai and guided a number of NGOs in
social service.