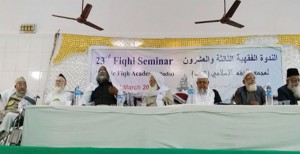 Jambusar, Bharuch: Eminent Ulema and Islamic jurists from India and abroad have urged the young ulema and muftis to follow the moderate path and to shun the practice of pouring scorn on those who follow different schools of thought. Speaking at the inaugural session of the 23rd seminar of the Islamic Fiqh Academy of India here at the sprawling campus of the Jamiah Uloomul Qur’an in the first week of March 2014, they said differences over jurisprudence interpretations have been snowballing into major controversies that is creating bad-blood among the different sects and is tarnishing the image of Islam as a whole.
In his key-note address, Fiqh Academy general secretary Maulana Khalid Saifullah Rehmani urged the young ulema to adopt a moderate approach in dealing with the Islamic jurisprudence issues. “Everybody should respect the difference of opinion in matters of fiqhi questions, and follow the etiquette of contradictory opinion”. He also warned that the practice of calling someone ‘kafir’ or ‘mushrik’, who differs on any fatwa, would create fissures in the Muslim society. He suggested that the madrasas should include subjects such as decorum for conflicting opinions and origins of differences in the syllabus of Madrasa. Difference of opinions is not a new phenomenon as it has existed since the period of Prophet Muhammad’s companions’ time as they used to differ on matters of faith, he stated.
Amir-e- Shariat Karnataka, Mufti Ashraf Ali Baqvi said that calling others as ‘mushrik’ has taken root in the Muslim society. Maulana Abdullah Kapadprui from South Africa said in western countries particularly in USA, UK and South Africa, the ulema are dubbing others as ‘kafirs ‘and ‘mushriks’ on trivial issues.
On the occasion, Maulana Abdullah Julum from Tamil Nadu said that the Islamic seminaries are not spreading the message of Islam to non-Muslims. He reminded that the Prophets’ main mission was to reach out to non- Muslims, but the madrasas had forgotten this mission. Maulana Mohammad Salim Qasmi said it is the responsibility of the ulema to guide the humanity as the Quran’ is the torch-bearer for the whole humanity.
The three-day seminar dwelt upon the issues of Citizenship and its Rights, Gift and the Concept of Will in the light of Islamic jurisprudence.