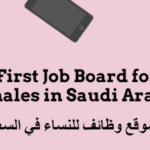 “Alajnabia”, or foreigner in Arabic, connects women job seekers with recruiters. An Algerian biomedical engineer is on a mission to make it easier for women to find work in Saudi Arabia by creating the first job-searching website for women in the kingdom. Australian-born Naziha Deriche, 23, who was raised in Saudi Arabia, realised after completing her postgraduate studies in Sydney last year, that it was hard for her and her friends to find jobs in Saudi Arabia.
“Most of the jobs advertised are for males in Saudi Arabia. And the working environment is mainly very male dominated here so I felt that there was a problem, sort of a gap,” Deriche told the Thomson Reuters Foundation by phone.
So she set up a free website this year called “Alajnabia”, or foreigner in Arabic, with the aim of increasing the amount of women in the workforce by connecting job seekers with recruiters. “It’s an ironic word. The reason we used that word ‘foreign’ is the fact that the idea of women working here in Saudi Arabia is so foreign,” said Deriche, speaking from Dubai where she is working because she couldn’t find a job in her field in Saudi Arabia. Deriche, who is working with 40 recruitment agencies, said the website has had 1,000 resumes uploaded since it was set up and keeps growing.
On the site job seekers can look for work and also employers can advertise jobs and look at the women’s resumes.
Jobs are also advertised on website’s social media platforms.
“We’re creating a healthy environment for competition where people are hired based on their skills, their qualifications, their abilities – rather than connections, or through word of mouth, or through knowing someone,” said Deriche.
(www.khaleejtimes.com)