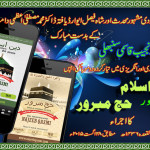 Riyadh: Two new Haj and Umrah applications in English, Urdu and Hindi were launched in Riyadh last month. The app named “Hajj e Mabroor” contains three books on Haj and Umrah, nine speeches, one Haj and Umrah presentation and 21 article. The second app has been named “Deen e Islam” and consists of 175 articles dealing with different aspects of life, 75 speeches and seven books. The apps have been prepared by Najeeb Qasimi and launched by Hadith scholar, Md. Mustafa Azmi. The English and Hindi versions of the website www.najeebqasmi.com  were also launched.