Islamic Voice 0 November, 2015 12:00 am
Public Health in India
Seminar and Play on Azad
“The Elders” Call on the World to Wake Up! 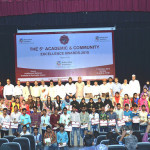 Jaipur: Helping Hands Foundation Jaipur felicitated 104 students for academic excellence as part of their fifth ‘Academic and Community Excellence Awards’ last fortnight. Speaking at the function, the chief guest, Haider Ali Zaidi, DCP (Traffic) Jaipur, said compartmentalizing knowledge in ‘worldly’ and ‘religious’ categories was not correct. “If you decide that you wish to make progress only on the basis of hard work, no one will be able to stop you,” he said.
Amir Hussain of Saint Soldier Public School and Aqsa Ali of Edmund Secondary School were awarded the joint first prize for scoring 95 percent in their Secondary School Examination (Class 10). Shakib Khan, an alumnus of Red Rose Public Secondary School and Sana Sheikh of Kuhu International, Sawai Madhopur received the second and third prize for scoring 93.83 percent and 93 percent respectively.
Apart from financial aid for the poor, the Foundation is also active in the field of health, women empowerment and skill development. Naeem Rabbani, General Secretary, Helping Hand Foundation pointed out said that the Foundation also conducts workshops for career guidance, computer education and tailoring. n
(twocircles.net)