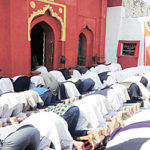 Ludhiana: In a remarkable expression of communal harmony, Hindus and Sikhs from Malla village of Ludhiana, Punjab, came together and offered their services to repair a mosque that had remained closed since 1947. The mosque opened to the public on February 29. It comes as a relief to the lone Muslim family in the village, and others in the area, who otherwise had to travel elsewhere to offer namaz. The mosque was identified by the Majlis Ahrar Islam Hind of Ludhiana. They approached the Imam of Jama Masjid, Ludhiana, Maulana Habib Ur Rehman Sani Ludhianavi for assistance. “We approached the villagers and they were ready to open it for re-construction,” said Maulana Habib. “We spent around Rs 6 lakh from Habib Charitable trust to re-construct it, and we are pleased to see that villagers irrespective of their religion even offered kar seva during the construction.” Namaz was offered since the day the mosque was re-opened, and a langar was arranged by the villagers. The Naib Shahi Imam was also present, who helped in construction of the mosque, while sarpanch Gurmail Singh and former sarpanch Avtar Singh, along with other villagers, organised langar for all.
“We believe in communal harmony and want to set an example for others that instead of creating walls of religion, one should live happily with each other,” they said.