Minorities at the Margins

Islamic Voice 0 December, 2014 12:00 am
Young Muslims from Manipur Felicitated
AMU to set up English medium Schools in UP
DMC Writes to Lt. Gov. to Initiate Action

Poverty among urban Muslims is 13% higher than India’s national average. Malegaon, Mumbra and Bhiwandi in Maharashtra illustrate how poverty is concentrated and perpetuated amongst urban Muslims.
By Abdul Shaban 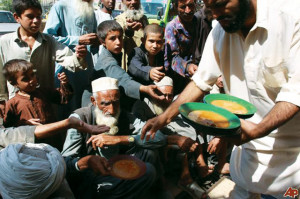 Muslims in India suffer acute poverty and marginalisation. Relative poverty in the community in urban areas since 1993-94 has increased mainly in the western and northern states of the country, while in the southern states it has declined. Western states also manifest higher socio-spatial exclusion of the community, with the community largely concentrated in poverty-ridden small and medium towns such as Malegaon, Mumbra and Bhiwandi in Maharashtra, or marginalised areas of the large cities.
While increased social exclusion and religious polarisation are pushing Muslims to urban areas, poverty amongst urban Muslims is 13-16% higher than the national average. In the western and northern states in particular, communalised state machineries and politics act as barriers to the economic and social mobility of Muslims. Malegaon, Mumbra and Bhiwandi in Maharashtra illustrate how poverty is concentrated and perpetuated amongst urban Muslims.
Historically, socio-cultural diversity has been India’s unique feature. Of late, this diversity has also created many social ruptures. In recent decades, political formations have used or exploited existing or manufactured fault lines between the communities as tools to garner votes. This has intensified differences between communities, especially along caste and religious lines.
Muslims, at 13.4% of the total population, constitute the largest religious minority group in the country (Census of India 2001). Geographically, this religious community is relatively more concentrated in urban areas and also in particular states. They are mostly concentrated in Jammu and Kashmir (67% of the total population of the state) Assam (30.9%), West Bengal (25.2%), Kerala (24.7%), Uttar Pradesh (18.2%) and Bihar (15.9%). In fact, three states — Uttar Pradesh (31 million), West Bengal (20 million) and Bihar (14 million) — together constitute 47% of the total Muslim population in the country.
A distinctive feature of the Muslim community has been the level of urbanisation of the community, which is higher than for the total population. In 2001, 35.7% of the Muslim population was urban compared to 27.8% of the overall population. In states like Tamil Nadu, Maharashtra, Karnataka, Andhra Pradesh, Madhya Pradesh, Gujarat and Chhattisgarh, a majority of Muslims live in urban areas. However, this urbanisation of Muslims is largely of a subsistence nature, and is hardly related to any significant improvement in the quality of their lives.
A large share of the Muslim population in India lives in adverse economic situations. In rural areas they have higher landlessness and a majority of those owning land have lower size of landholding (NSSO 2007). The lower educational attainments in comparison to other socio-religious groups (Government of India 2006: 64) and prejudices against the community mar the aspirations of even the highly educated in the community. Among others, the aspiration for better wages and employment forces them to migrate to urban centres in relatively greater proportion to their number. The increased religious polarisation of communities in the rural areas of many states and fear of riots also act as push factors for Muslims to migrate to urban areas. In urban areas, Muslims are further confronted with strong and intensified forms of socially exclusionary practices and violence, leading to their concentration in a few towns or in marginal and peripheral areas within a large town (Shaban 2010; Robinson 2005; Masselos 1994; Phadke 2007). The section of Muslims living in older parts of towns/cities also finds it difficult to move to newly developed areas due to the fear of riots, lack of affordability due to rising house prices, and availability of housing finance (Shaban 2010). The consequence is that in urban areas a large section of the Muslim population lives in slums and shanties, or dilapidated older parts of towns/cities.
Maharashtra is a typical example of this kind of distribution of Muslim population. More than 70% of the Muslim population in the state lives in urban areas, but is concentrated either in specific marginal parts of bigger towns or in Muslim-concentrated small and medium towns such as Malegaon, Bhiwandi, Mumbra, etc.

Poverty and marginality among Muslims
Available data since 1993-94 shows that Muslims have been plagued by poverty and penury, and at the national level, poverty is highest among Muslims after the Buddhists who include a large share of dalit (scheduled caste) populations. At the aggregate level (rural + urban), poverty among Muslims has been higher by about 6 percentage points over the years. But it is in urban areas that poverty pervades the lives of Muslims in a significant way. Whereas, on an average, poverty among Muslims in rural areas has been around 3% higher than the national average, it has been higher than 13-16% over the years, 1993-94 to 2009-10 in urban areas. In fact, in 2004-05 and 2009-10, Muslims had the highest level of poverty among all religious communities living in urban areas. Compared to the Muslim minorities, Jains and Sikhs have significantly higher standards of living and less poverty.

Poverty among Muslims in urban areas of Maharashtra
Maharashtra is one of the states that has seen a relative increase in levels of poverty among Muslims in urban areas in 2004-05 and 2009-10, compared to 1993-94. Given that more than 70% of the 10.27 million Muslim population in the state (as per Census 2001; the Census 2011 data on religion-wise distribution of population is still not available) lives in urban areas, this is great cause for concern. An analysis of Census 2011 data shows that a large share of the urban Muslim population lives in Mumbai, Mumbai (Suburban) and Thane district. Other cities like Nagpur, Pune, Nashik and Aurangabad also have a significant number of Muslims. However, among these urban centres, a large share is concentrated in specific towns like Malegaon, Mumbra, Bhiwandi, Mira Road, or marginal, peripheral and poverty-stricken areas of the big cities, like Gowandi, Sonapur-Bhandup, Kurla, Jari Mari, Nagpada, etc, in Mumbai. Detailed data on some of these areas has recently been made available from studies undertaken by the Tata Institute of Social Sciences, Mumbai, and other educational institutions in Mumbai.

Marginalisation of Muslims in Malegaon and Mumbra
Malegaon is a typical Muslim town which has, over the years, stagnated due to neglect by development agencies. The town has had a glorious past and for over one-and-a-half centuries has been known for its handloom- and powerloom-based textile industries. The city has often been claimed as the Manchester of the East. However, notwithstanding its glorious history, enterprising people and hardworking labourers, this city of about 4.7 lakh population (Census 2011) remains underdeveloped and suffers many social problems including communal strife and violence between Hindus and Muslims. The city is symbolised by extreme poverty, stark religious segregation, harsh working conditions (often spanning 12-16 hours), lack of housing, sanitation, educational and health facilities, and deafening sound pollution emanating from the looms.
The available data shows that a sizeable proportion of the population of Malegaon town lives in multidimensional poverty and penury: ill health, unemployment and lack of education, housing and other infrastructure (Shaban 2012). TISS sample survey data shows that about one-third of the town’s population survives on a per capita income of less than Rs 500/month. The share of population living below the poverty line (according to the poverty line suggested by the Suresh Tendulkar Committee, updated per capita income of Rs 961.1 per month for 2010-11 is used to calculate the level of poverty) is 72.0%. Poverty among Muslims is more acute — about 77.5% of the total Muslim population lives in poverty, while among non-Muslims the share of population living below the poverty line is 49.7%. About 82% of the total population lives below the per capita income of Rs 1,000, and may be considered extremely vulnerable.
Given that Mumbra is located at the periphery of Mumbai, a major metropolitan centre and commercial and financial hub of India, one expects that poverty levels among the people living here will be lower as work and income opportunities are better. A study conducted by TISS in 2012 shows that though the condition of Mumbra’s residents is relatively better than in Malegaon, even here about 27.6% of Muslims live below the poverty line while another 43.4% live on the margin or just barely above the poverty line, their per capita income ranging between Rs 1,163 and Rs 2,500. It is noteworthy that middle- and upper-middle-income groups among Muslims are almost missing as about 93% of the total population lives below the per capita income of Rs 5,000 per month. It may also be noted that the purchasing power of the rupee is quite low in the Mumbai region and the state average urban poverty line income of Rs 1,162 for the year 2012-13 barely enables a person to keep body and soul together.
Available data reveals that Muslims in India, specifically those in urban areas, suffer acute poverty. Except for Buddhists, they have the highest poverty level among all religious groups in the country. There is a sharp regional divide with respect to the socio-economic situation of Muslims in the country. The relative situation of Muslims with respect to share of population living below the poverty line has worsened in northern and western states of India, whereas it has relatively improved or is stable in southern states like Andhra Pradesh, Karnataka, Tamil Nadu and Kerala. Among the eastern states, West Bengal has also shown stability in relative poverty among Muslims. This shows that southern states and West Bengal have a more inclusive social order and the fate of all communities moves together, while the northern and western states have been more exclusionary towards Muslims. India’s western and northern states have been more affected by right-wing politics and the state machinery and society in general are more communalised.
Gujarat and Maharashtra are among the major states with a significant share of Muslim population. However, in these two states, due to increasing communal polarisation, Muslims are located in specific towns or specific Muslim-concentrated areas within cities. Malegaon and Mumbra are two typical examples of this pattern and the available data shows that a large segment of the Muslim population of these towns lives in sub-human conditions, without any significant developmental intervention from the state.
(Abdul Shaban is Professor and Deputy Director of Tata Institute of Social Sciences (Tuljapur Campus). Shaban has been teaching ‘Social Justice and the City’ to MPhil and PhD students at TISS- Mumbai).