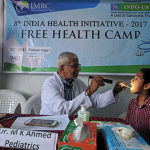 Dehradun: The eighth annual India Health Initiative-2017, a programme created by a US-based NGO, India Muslim Relief and Charities (IMRC), to provide medical services to poorest of poor in India, concluded with a note of inter-religious harmony at Dehradun on February 12th.
The three-day free health camp, which treated 886 patients in Dehradun was organised at Kagyu College, an institute of traditional higher Buddhist philosophical and scriptural study. Buddhists along with the local Muslim populace were treated for different health-related issues.
Free health camps were organised for 11 days in three Indian states”Uttar Pradesh, Telangana, and Uttarakhand”from January 28 to February 12, 2017, where 4,380 poor patients were treated by volunteer US-based doctors.
At Dehradun, free health camps were coordinated by IMRC with International Drikung Kagyu Council (IDKC.) “It was the very first time that such a health camp was organised in our monastery and it was a real wonderful experience working with IMRC. People who got treated in the camps were all praise for the doctors. More than a free health camp, it was also symbol of religious harmony, since a Muslim NGO organised health camps for Buddhist people,” said Khenpo Rangdol, the local coordinator of health camps.
Dr. John Rosenberg, a California-based doctor who has been volunteering for India Health Initative since last six years, termed working in the health camps as an experience to remember. “This year was quite different from the camps held since last seven years. At Dehradun, we saw whole different population. People were great and appreciated the medical help,” he said.
The India Health Initiative was started by IMRC in 2010. Every year, IMRC assembles a team of doctors from the United States of America to volunteer for the health camps. The medical camps are organized for three weeks in semi-slums and rural areas of different states to target poor patients. This year, nine US-based doctors with different specialties provided free medical services.
(Extracted from twocircles.net)