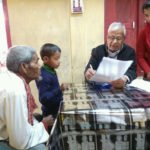 The ninth annual India Health Initiative-2018, program created by India Muslim Relief and Charities (IMRC), a US-based NGO, to provide medical services to poorest of poor in India, completed another five-day health camp in Assam where 3,226 patients were treated.
The five-day free health camp was organised across different locations in coordination with Ajmal Foundation. The free health camp in Assam started on February 2, 2018, and concluded on February 6. The patients in the camps were provided with free medicines after free check-up of vital health signs. The India Health Initiative was started by IMRC in 2010. Since its inception, IMRC has conducted eight India Health Initiatives comprising of medical camps across different rural areas, poor localities and slums in India. As a part of the 9th IHI, free health camps were organised for 12 days in three Indian States: Telangana, Assam, and Manipur from January 27 to February 11, where 9,612 poor and needy patients were treated by US-based IMRC doctors.
(Two circles.net)