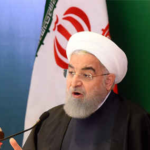 Hyderabad: Iranian President Hassan Rouhani lauded India’s cultural diversity, saying multiple faiths and schools of thought co-exist peacefully in the country. Speaking at a meeting with Muslim intellectuals, scholars and clerics in Hyderabad recently, Rouhani, who arrived in Hyderabad on a three-day India visit, said Islam is not a religion of violence, but one of moderation. “Iran wants unity, independence and support for the East. Iran wants fraternity with India. We do not want to have any differences with other countries as well,” said Rouhani who was on his first India visit since assuming charge as president in 2013. The Iranian President lauded India’s culture and traditions, and said the country was a “living museum” of religions and schools of thought. “We see a lot of temples, other places of worship, and they are living in peace.” “He said that” people of different faiths” “ “ are co-existing in peace in India.