Curtains drawn over yet another viciously hyped-up saga of conspiracy. 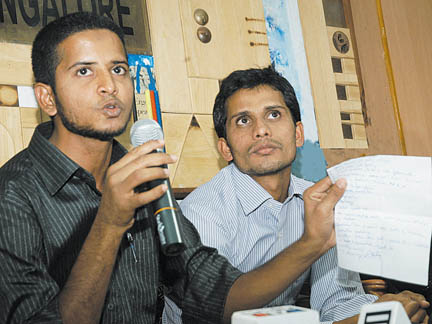 Bangalore: The curtains are down on yet another saga of arrest and release of two innocent Muslim youth. It is a saga of a fiasco of a case which the administration touted as a conspiracy against the nation by educated Muslim youth in the technology hub of Bangalore. Ultimately, it was the special court that set them free after the probing agencies failed to find any prosecutable evidence against the accused. It were the same youth whom the police paraded as “mastermind” in a plot to kill politicians and rightwing-leaning journalists.
On February 25, Muthiur Rahman Siddiqui, 27, a reporter with the Deccan Herald, and his roommate Yusuf Naalband walked free out of the Bangalore Central Prison after having been absolved of all charges. It was on August 29 that the Central Crime Branch (CCB) of Karnataka Police had arrested them together with another five colleagues from their residence in J. C. Nagar. As is its wont, the Media went gaga over the arrest causing a lot of demoralization among the considerable Muslim minority in the city. In a highly dramatized manner, the CCB even sealed the scribe’s computer terminal in the newspaper office and announced finding of Jihadi literature from his possession. Such was the vicious hype built up by the media that the City’s Police Commissioner Jyothi Prakash Mirji had to caution it against writing speculative reports.
But around the middle of February it became apparent that the National Investigation Agency, which had meanwhile taken over the case, could not find anything worth prosecuting in a man dubbed ‘Mastermind’ by the local media. This naturally raises the question if the ‘Mastermind’ could be absolved, would the charges stick for the over half a dozen alleged flunkeys who are being chargesheeted. The media had even highlighted names of leading journalists whom ‘the group wanted to assassinate’. One among them, editor of a leading daily in Bangalore, overwhelmed with the perception of a living martyr, even penned a column in the Outlook shortly afterwards.
However, most mediapersons were in a chastened mood when Muthiur Rahman Siddiqui addressed a crowded press conference in the Bangalore Press Club on February 26, a day after his release. There were heads nodding when he appealed to the fraternity of scribes to be sensitive towards the plight of Muslims among whom the innocent youth are being picked up regularly and being consigned to the cells on dubious grounds. He asked the journalists to shun maligning of the community. Siddiqui, who rose from a humble origin from the city of Hubli, urged the media not to take whatever comes from the Police as gospel truth as they would be risking their credibility in the long run. He also appealed to them to develop a keen sense of discernment while judging people and avoid being misled by the propaganda. He said the police administration needs to be sensitized in dealing with security issues and linking people with heinous crimes against the nation.
Siddiqui said the courts had done justice to him and proved his innocence beyond doubt. He obliquely pointed at some fascist forces who were behind maligning him. He said though he was not tortured, the incarceration for 180 days in itself was a mental torture. He hoped that other colleagues of him too would come out unscathed as they were innocent.