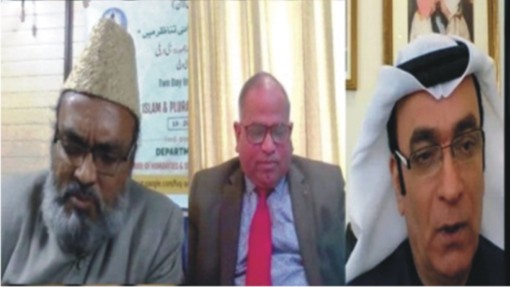 New Delhi: Speaking as chief guest at a 2-day virtual conference on “Islam and Pluralism: The Indian Perspective, ” UAE Ambassador to India Dr. Ahmed Abdul Rahman Al-Banna quoted several verses of the Qur’an to underline the plurality of human beings.

The envoy said India has a long history of diversity and noted that the UAE boasts the world’s largest Indian diaspora, with over 3.5 million people, demonstrating “our respect of plurality.”
In his address, Islam accepted a diverse society both in Makkah and Madina, said Maulana Khalid Saifullah Rahmani, General Secretary of the All India Muslim Personal Law Board. Accepting diversity is exemplified by the Qur’anic concept of “for you, your deen (religion/path) and for me my deen.”

The famous phrase ghair, or ‘other,’ is an un-Islamic way of addressing individuals because, according to Maulana Rahmani, “those whom we name others are truly our brothers on at least two accounts: first, they are our countrymen, and second, they are our brothers based on humanity.”

Mohammad Afzal Qasmi, who joined from Blackburn, London, focused on pluralism and based his reasoning on a Qur’anic scripture. He claimed that when famine struck Makkah, Prophet Muhammad, who was compelled to flee his hometown and relocate to Madina, provided food and other necessities to the people of Makkah.

Qasmi also told the anecdote of the second Caliph Hazrat Umar, who refused to impose Islam even on an elderly lady, claiming that forcing religion is against Islam’s precepts.

On January 19-20, 2022, Jamia Hamdard’s Department of Islamic Studies hosted the conference to highlight Islam’s plural character. “The seminar’s research papers and discussions are designed to assist uncover essential features of intercommunity and interreligious connections, as well as the gaps that have grown over time between different religious communities.