Islamic Voice 0 April, 2015 12:00 am
59 Hindus in Tihar Jail observe Fast with Muslim Co-Prisoners
Our Overcrowded Jails
Jamaat Islami Chief Urges to Help Jamaat in the Creation of a Just Society

Acquittal of 16 accused of the 1987 massacre of Muslim youth by a Delhi court, shocks survivors.
By Abdul Bari Masoud 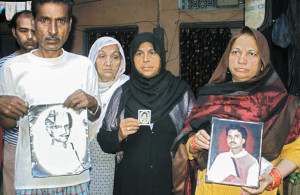 New Delhi: Expressing shock over the acquittal of 16 Uttar Pradesh Provincial Armed Constabulary (PAC) personnel in the 28-year old Hashimpura/ Maliana massacre case in which 42 innocent Muslims were cold-bloodedly killed by the PAC men, the victims described the judgment as travesty of justice and said they had lost hope in the system.
One of the survivors of the May, 1987 massacre, which was described by the Amnesty International as genocide, Babuddin said, “We have lost confidence in the system as we had been running from pillar to post to get justice, now all our struggle went in vain”.
Talking to Islamic Voice here after Additional Sessions Judge Sanjay Jindal in the Tees Hazaari court pronounced the judgment on March 21, Babuddin, who is a weaver by profession, has even alleged that ‘the verdict came at the behest of the government at the Centre’. Babuddin, who was shot thrice in the chest and leg, but survived as the PAC men left him considering dead, recalling the gory incident said the bloodthirsty PAC personnel had first put all the 47 youths in a row and then let loose the hell-fire from all directions on them as there was huge commotion and distress. “When we were pleading for mercy, the gun-toting PAC disdainly asked to give a distress call to Allah, if He does exist, he will come for Your rescue (Allah ko yaad karo, agar hoga to bachaney ayega).”
Another survivor Mujibur Rehman, who is now 48, narrated the hellish experience with tears in his eyes. He rued that they (victims) did not wait this long torturous years for this day as all the culprits were absolved of their crimes against humanity. As survivors, we were the eyewitnesses of the massacre and identified the guilty personnel but the court overlooked our evidence, he said.
Echoing the same sentiments, Islamuddin, whose brother Nizamuddin was killed in the massacre, said their plight itself is posing a question to the conscience of the country if they would ever get justice. “We have been struggling for 28 years to get justice but our hopes have once again been dashed”, he said. Family members of other victims, including 77- year old Jamaluddin Ansari (whose 22- year old son Qamaruddin was killed) and the mother of victim Nasim Bano were shocked after hearing the judgment. They told Islamic Voice that they have lost count of the trips they have made to Delhi’s Tees Hazari Court.
It may be recalled that around 19 PAC personnel were facing trial for allegedly killing 42 youth in Hashimpura Mohalla of Meerut in Uttar Pradesh on May 22, 1987, of which three have died during the trial.
Suresh Chand Sharma, Niranjan Lal, Kamal Singh, Rambir Singh, Sami Ullah, Mahesh Prasad, Jaipal Singh, Ram Dhayam, Sarwan Kumar, Leela Dhar, Hambir Singh, Kunwar Pazal Singh, Budha Singh, Budhi Singh, Mokham Singh and Basant Vallabh were facing trial in the case. Many of them got promotion despite facing trial.
The chargesheet in the case was filed before the chief judicial magistrate of Ghaziabad district in 1996. But the case was transferred to Delhi in September 2002 on the order of Supreme Court after relatives of the victims filed petitions that they had no confidence in the Ghaziabad court. Late human right activist Prof. Iqbal Ansari (since deceased) and others played an important role in shifting the case to Delhi.
Reacting to the judgment, Uttar Pradesh government prosecutor in the case Ali Akbar Abidi said the prosecution has presented all the relevant evidence, but the judge did not look into them. He said the UP government would now decide about going into appeal against the verdict.
Meanwhile, noted human right activist and Supreme Court lawyer Vrinda Grover, who has been pursuing the case along with public prosecutor has lambasted the UP government and State Police for poor investigation in the case and weakening of the prosecution. She said “The government and the police from the beginning botched up investigations to weaken the case in order to protect the guilty.”
Admitting that it was a setback, she said the future course of action will be decided after going through the whole judgment.
The Additional Sessions Judge has absolved 16 PAC personnel from all charges including murder, attempt to murder, tampering with evidence and conspiracy by giving them the benefit of doubt, adding that lack of evidence has failed to establish their identification in the case.
It seems that political parties would have lost interest in the 28-year-old Hashimpura massacre story that grabbed headlines in the late 80s. But, now after the Delhi court’s verdict, it may return to haunt the politics in Uttar Pradesh and the country. Samajwadi Party’s government in UP may face ire of the people as it had promised in its manifesto of bringing killers of Hashimpura massacre to justice. It knew what happened with Congress as after the 1987 Hashimpura killings, the then ruling Congress has never returned to power in the state.
It is also worthwhile to mention that in 2012, Subramanian Swamy, who was then Janata Party President, knocked the door of the Delhi court seeking directions for further probe into the massacre. In his application, he sought probe into the alleged role of P. Chidambaram, who was then minister of state for home at the Centre, on the ground that a crucial part of the investigation has been deliberately not investigated due to political consideration. But his application was dismissed. Since then, Swamy has joined the saffron bandwagon.
“The acquittal of all the surviving accused in the Hashimpura-Maliana massacre of 1987 is a murder of justice and a black day in the history of India,” said Dr. Zafarul-Islam Khan, President of the Muslim Majlis-e Mushawarat. “The intentions of the rulers were not good from day one in this case, as all attempts were made during these past 27 years to shield the criminals in uniform. The U.P. state government continued to tell the courts that it cannot find the accused while they were actually serving in their units, getting promotions and even retiring with full benefits,” he added.
Muslimmirror.com