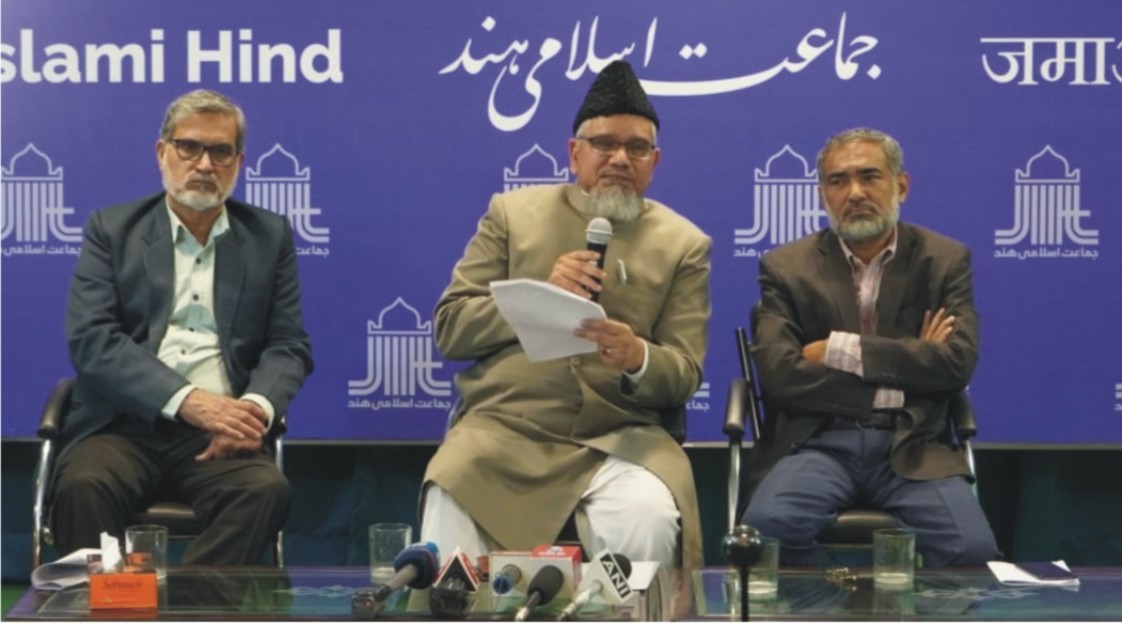 Jamaat-e-Islami Hind raises concerns over the system of electoral and political funding; demands to extend reservation benefits to Dalits, who convert to Christianity, Islam

New Delhi: Jamaat-e-Islami Hind (JIH) has raised concerns over how the elections in India are funded and contested by the political parties.

Addressing the monthly press briefing, held today at the JIH headquarters, JIH Vice-President Prof. Mohammad Salim Engineer has opined on various issues including electoral funding, reservation benefits for Dalits, who convert to Christianity and Islam under Article 341, and the Supreme Court’s recent remarks against hate speeches.

Speaking on political funding, Prof. Salim cited a study conducted by the Center for Media Studies, which estimated that the Lok Sabha elections in 2019 cost Rs. 55,000 Crores, which was the world’s costliest conducted elections ever while the share of the ruling party was half of the above amount. He noted that the study estimated that a third of the amount was spent on poll campaigning and publicity and about a fourth of that amount or Rs 15,000 crores was distributed among voters to influence and buy their votes.

Pointing out that another ingenious way deployed by the politicians to fill their coffers is the method of funding through electoral bonds, Prof. Salim said that according to an RTI, the government printed 10,000 electoral bonds worth Rs 1 crore each in 2022 and according to the latest available SBI data, political parties secured Rs 545 crores through electoral bonds ahead of the assembly elections in Himachal Pradesh and Gujarat. He noted that ever since the Electoral Bond Scheme was introduced, the total amount collected by political parties now reached Rs 10,791 crores, which was collected from various anonymous donors in 22 phases in the last four years.

Prof. Salim said that the electoral bonds were anonymous, however, since they are sold by a government-owned bank (SBI), it was easy for the government to know who was funding the opposition. “By amending the Finance Act 2017, the government has exempted political parties from disclosing donations received through electoral bonds, which prevents the voters from knowing the identity of the individual, company, or organization that funds the party, and to what extent. This disproportionate share of money in electoral politics and that too in a non-transparent manner is not healthy for a democracy,” he added

The JIH Vice-President called on political parties to come together to bring about legislation to curb the growing clout of money power in elections by making the entire process fair and transparent.

Urging the Election Commission of India (ECI) to introduce measures to ensure transparency about donors to political parties, Prof. Salim held that the poll panel is not playing any role in regulating the growing expense of elections. He added that political parties should also present their accounts in the public domain.

Saying that the judiciary is yet to pronounce any judgment about electoral bonds, Prof. Salim hoped that the Supreme Court would pronounce the verdict soon in favour of fairness, transparency, and strengthening democracy.

The JIH Vice-President has demanded to extend of the reservation benefits to Dalits, who converted to Christianity and Islam, besides Dalit Hindus, Buddhists, and Sikhs.

Speaking on the issue, Prof. Salim said, “under Article 341 of the Constitution, the President of India may ‘specify the castes, races or tribes or parts of or groups within castes, races or tribes which shall…be deeamed to be Scheduled Castes’. Earlier this benefit was only confined to Dalit Hindus (1950) but later on, Sikhs were added to the list in 1956 and then Dalit Buddhists also were added in 1990.”

Prof. Salim hoped the Commission, headed by the former Chief Justice of India and former chairperson of the NHRC, K G Balakrishnan would look into the issue, ensuring equal treatment for those Dalits who became Christians and Muslims. He said, “we hope our Dalit brothers and sisters will not be deprived of the benefits of reservation simply because they became Christians and Muslims.”

He endorsed the concerns of the court which directed that FIRs should be registered and criminal proceedings initiated against the makers of hate speech irrespective of their religion to preserve the secular character of the country.

Stating that now the onus is on the government and the police to implement the SC directives, ensuring zero tolerance for hate speeches, Prof. Salim said that anyone violating the court directives should be arrested and prosecuted as per the provisions of the law. He also urged civil society to play its part in monitoring and opposing hate speeches and creating awareness regarding the ill effects of communalism and violence, on the unity and harmony of the country.

Speaking on the newly-released National Curriculum Framework (NCF), Mr. Syed Tanveer Ahmed, director of JIH Markazi Taleemi Board (MTB) has informed that the MTB organized an online consultative meeting with experts to discuss and review the NCF for the Foundational Stage released on the NCERT website. He welcomed the long-awaited release of the first of four NCF documents, but expressed apprehensions that the NCF for Foundational Stage of Schools (2022) needed critical review and deepening of the consultative process. He hoped that the current document as well as all future NCFs be made more inclusive, socially just, and substantially reflective of shared, consensual constitutional values which are truly inclusive of all communities and learners of all backgrounds.