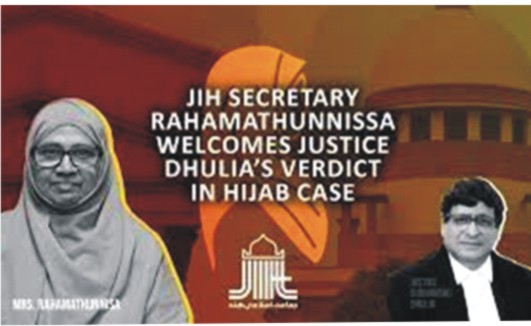 In a statement, Mrs. Rahmathunnissa, national secretary of the (JIH) women’s wing commended Justice Dhulia’s stance that donning a hijab is a matter of choice.

“We concurred with Justice Dhulia’s remarks that the “Karnataka High Court took the wrong path” and that Article 15 is “a matter of choice, nothing more and nothing else, “she added.

The Supreme Court on October 13 gave a split verdict on the ban on wearing of hijab in educational institutions in Karnataka – with one judge Justice Hemant Gupta affirming that the BJP-led state government is authorized to enforce uniforms in schools and the other judge Justice Dhulia’s calling hijab a matter of choice that cannot be stifled by the state.

Appealing to the judiciary to expedite the matter, she said “It is already affecting many girls and depriving them of their fundamental right to attend college and study in the education stream of their choice.”

She also appealed to the government of Karnataka to withdraw its controversial order in view of Justice Dhulia’s observation and make an end to the unwarranted controversy.

“the JIH feels that it is not the job of courts to decide about essential religious practices of any religion. We are not against the practice of uniforms in educational institutions. However, publicly funded schools, while deciding the dress code, should maintain neutrality and respect for the religious and cultural practices of the concerned students, and the dress code should accommodate their religious principles, cultural leanings, and the voices of their conscience. If the Karnataka HC order is upheld then it may exclude Muslim women from education and it goes against the stated policy of the government of including all communities and social groups in the path of progress and development. Education is a crucial national priority and it demands a conducive atmosphere where all could pursue their education without being forced to make any compromise on their faith or conscience,” Mrs. Rahamathunnissa explained.