Muslims urged to ensure their names in the Voters’ List for the April-May election. 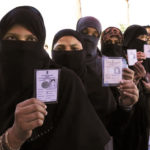 Burqa clad Muslim women show their voter ID card while lined up outside a polling station to cast their vote for BMC elections at Dharavi on Tuesday.
Express photo by Prashant Nadkar, 21st February 2017, Mumbai.

Bengaluru: Over a million Muslims eligible to vote in Karnataka do not have their names in the electoral rolls.The state will be going to polls in April-May to elect the 224-member Assembly.
A study carried out by the New Delhi based Center for Research and Debates in Development Policy (CRDDP) says preliminary analysis of the data from 224 constituencies suggests that up to ten lakh or more Muslim voters do not have names in the voters list, nor do they own a Voter’s ID in Karnataka.
In a presentation to a select audience, Mr. Abusaleh Sharieff,
founding president of the Center, said the CRDDP had completed data analysis for eight Assembly constituencies namely, 1- Shivajinagar; 2-Pulakeshinagar (which includes Muslim dominated Frazer Town); 3-Hebbal (including several Muslim habitations); 4- Jayanagar; 5- Padmanabhanagar; 6-B. T. M. Layout (all of them in Bengaluru) 7- Hubballi East and 8- Kolar. The analysis found that 65,258 households have such adults whose names do not figure in the voters’ list.

Shivajinagar Constituency
In the Shivajinagar constituency, where a total of 18,453 Muslim households were identified, 8,795 households have only one registered voter. This is surprising as only 4.2% of the households under the BBMP area are known to have a family size of one person. Based on this, only around 790 households should have one registered voter. The survey concludes that in Shivajinagar constituency alone around 8,002 Muslim households have unregistered adults.
Mr. Shariff said he was confident that around a million Muslims eligible to vote do not have their names in the electoral rolls and believes that the number could as well be around 15 lakh.
The CRDDP has developed an ‘Android App’, namely ‘Muslim Voters’. The unregistered voters can view these households with correct postal address and help them apply for a Voter’s Listing and issuance of IDs. Application for registration of voters can be made until the last day of nomination.
The CRDDP will complete analysis of all the 224 Assembly constituencies and add the details of all missing voters that can be accessed through the Android app cum website.
The Center has called for volunteers from every Assembly constituency. Each volunteer will be given access to the Android App where he or she can take responsibility for servicing 20 to 25 households. Volunteers during their visits will update the contact numbers of the new applicants for the voters’ ID through the App.
CRDDP sources said the App had been downloaded by 6,000 volunteers by March 17 and the CRDDP had vetted a little over 3,026 volunteers. The volunteers were ready to fan out to the households and help the unregistered voters to make a formal application to secure a voter’s ID.
The App can also be downloaded by giving a missed call on cell phone: 8099-683-683.
The meeting was attended by Mr. Naseer Ahmed, Chairman, Karnataka State Minorities Commission. Mr Azeezulla Baig, (IAS retd.), Mr. Sanaullah (IAS Retd) and several other prominent members of the community attended the meeting.