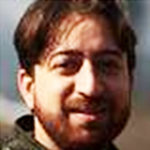 It may seem hard to believe given the current reality in the Kashmir Valley, but not too long ago some Kashmiri Pandit poets were writing verses in praise of Prophet Muhammad. Srinagar witnessed a rare Ramadan cultural event where many of these poems were celebrated and sung by Muslim vocalists. The Valley’s leading singers, Waheed Jeelani, Muneer Ahmad, Qaiser Nizami, Raja Bilal, Altaf Sahil, Tehseena Shafi, Shazia Bashir, Qazi Rafi and Gulzar Ganai lent their voices to poems written by Pandit poets such as Dina Nath Nadim, Pyare Hatash, Prem Nath Shad, Pitambar Nath Fani, and Prakash Ram. The event, titled ‘Naatiya poetry of Kashmiri Pandits’, was organised by the Cultural Academy at the Tagore Hall auditorium. The programme is a bid to revisit old bonds and create new ones between the two divided communities. “This is an attempt at a cultural renaissance aimed at educating our new generation about our rich and glorious past,” said Jammu and Kashmir’s Culture Minister Naeem Akhtar.