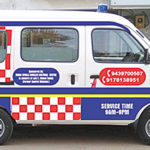 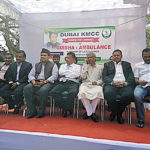 The image of Dana Majhi and Sumi Dhibar walking with the dead body of their kin in Kalahandi and Angul districts had presented a haunting picture of the plight of the health sector in rural Odisha. To ensure that such events are never repeated, the Dubai wing of Kerala Muslim Cultural Centre (KMCC) has contributed two ambulances to provide the underprivileged persons in rural hamlets with better services in memory of Former Union Minister of State (External Affairs) and IUML leader E Ahmed.
The ambulances were handed over to Mahabir Sanskruti Anusthan, Bhawanipatna, Kalahandi and Moslem Welfare Society, Gadia Sahi, Balasore at a function, held at Press Club of Odisha last fortnight.
The initiative was taken up following the intervention of IUML MP, P V Abdul Wahab. A total of Rs. 10 lakh was spent by KMCC, the expatriate body of IUML towards the charity activity. As per the agreement, the ambulances will be run and maintained by the two NGOs. The organisers told Twocircles.net that the charity activity was carried as part of KMCC’s social outreach programme, being held all over the world.
KMCC is constructing several houses for ailing expatriates through its Pravasi Baithu Rahma programme and has already built forty houses in Tamil Nadu for poor people. P V Abdul Wahab M P, Youth League leader Munavvarali Shihab Thangal and KMCC leaders Anwar Naha and Ibrahim Murichandi attended the programme.
(twocircles.net)