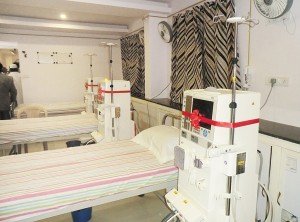 Bangalore: The Dialysis Centre of the Hazrat Bismillah Shah Hospital, was commissioned here with installation of four dialysis machines on October 8, 2013. Director of the Hospital Dr. Taha Mateen, CEO of HBS Hospital informed a gathering of guests present at the ceremony that the Hospital would charge only Rs. 550 for a single dialysis even while other hospitals in the city were charging Rs. 1,100. He said two more machines would be added very soon.
Dr. Mateen said two of the machines were donated by the Khasim Khan Trust run by the family of Union Minister K. Rahman Khan. Mr. Kamal Pasha of Golden Hatcheries and chairman, Bismillah Shah Masjid Committee announced a donation of Rs. one lakh at the occasion. Mr. U. T. Khader, Karnataka Minister for Health who inaugurated the Dialysis Centre by cutting the ribbon, said he had proposed inclusion of dialysis under the Arogya Shree scheme for BPL cardholders in the state and setting up dialysis units in every taluk. He also disclosed the proposal for free regular test for blood pressure and sugar for people aged above 30 in the State at government hospitals.
Mufti Ashraf Ali, rector of the Darul uloom Sabeelur Rashad, who switched on the dialysis machines at the ceremony said, entire humankind is considered the family of God in Islam and anyone working for the well-being of the humanity was fulfilling the basic duty under Islam. He exhorted the philanthropists to donate generously for the ‘Kind Friends of Kidneys Fund’ of the HBS Hospital.
Mr. Roshan Baig, MLA of Shivajinagar, said the Lady Bowring and Curzon Hospital in his Constituency has also set up a Dialysis Centre with five machines and he was instrumental in getting the Hospital 24 ventilators recently. He said, he was behind the expansion of the Haji Sir Ismail Gosha Maternity Hospital and the newly extended wing was patterned after the old heritage building. He recalled that the Waqf land of the HBS Hospital was allotted for the purpose of setting up the hospital to the Khuddamul Muslimeen Trust during his tenure as Waqf Minister.
Dr. Mateen informed that the Hospital was in the process of setting up a catheterization Laboratory (Cath Lab). Cath Lab is an examination in a hospital or clinic with diagnostic imaging equipment used to visualise the arteries of the heart and the chambers of the heart and treat any abnormality found. He said the Hospital envisages setting up a training centre for dialysis technicians.
(The HBS Dialysis Unit team can be reached at HBS Hospital, 58, Cockburn Road, Bangalore: 51.Ph: 080-25541321)  Email: ([email protected] and [email protected])