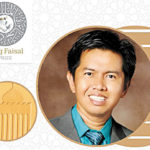 Five researchers and scientists from Malaysia, Jordan, Tunisia, the US and the UK have been named winners of the King Faisal International Prize (KFIP)for the year 2018, as the 40th edition of the renowned award recognized their distinguished contributions towards humanity. The King Faisal International Prize for Service to Islam has been awarded to Prof Irwandi Jaswir of Indonesia. Jaswir was recognized for his contribution to the establishment of ‘Halal Science’ pertaining to food, his research in that area and the development of new methods for analyzing substances used in the manufacturing of ‘Halal Food Alternatives’. Jaswir collaborated to develop new methods for quick detection of non-Halal substances in food. A notable example being the ‘Portable Electronic Nose’ which detects within a few seconds the presence of alcohol or lard (pork/porcine-derived fat) in foods. Irwandi and his research team have produced a mobile kit for detecting non-halal materials in food, cosmetics and consumer goods to protect the interests of Muslim consumers. The kit can identify and detect the presence of alcohol and porcine-based fats in food and beverages within a few seconds.
Prof Irwandi Jaswir was born on 20 December 1970 in Medan, North Sumatra, Indonesia. He obtained his Bachelors degree in Food Technology and Human Nutrition in 1993 from Bogor Agricultural University in Indonesia, his Master of Science in Food Science and Biotechnology in 1996, as well as his PhD in Food Chemistry and Biochemistry in 2000 from the Universiti Putra in Malaysia. Currently, Jaswir is the Deputy Dean of the International Institute for Halal Research and Training (INHART, and Secretary of Council of Professors at the International Islamic University Malaysia.
The prize for Islamic Studies (Topic: Critical Editions of Islamic Historical and Biographical Texts) has been awarded to Professor Bashar Awad of Jordan. The selection committee picked him for the award in recognition of his broad historical and geographical views in his editing studies which covered the works of Hadith and history of scholars as well as some of the famous Islamic figures. His works have set the foundations for rules and principles governing the practice of editing, which have brought this field closer to becoming a science based on precision, integrity and extensiveness.
The prize for Arabic Language and Literature (Topic: Studies Dealing with Autobiography in Arabic Literature) is for Prof Chokri Mabkhout of Tunisia. The panel named him for the prize in recognition of his originality in the treatment and analysis of Arab biographical themes. It also appreciated his ability in absorbing the theoretical background and investigating the artistic and intellectual values in biographical themes, as well as the variety of critical approaches he adopted in his studies and the sober and aesthetically outstanding language in his critical analyses. Born in 1962 in Tunisia, Mabkhout currently is the president of Manoubah University.
The prize for Medicine (Topic: Immunotherapy for Cancer) is awarded to Professor James Patrick Allison of USA, for his outstanding contribution to the development of the field of immunotherapy of cancer. Prior to the work of Allison, there used to be three basic treatment options for cancer: (a) surgery, (b) radiation and (c) chemotherapy or some combination of those three. Now, we can claim to have a fourth option. Immunotherapy, also called biologic therapy, is a type of cancer treatment that boosts the body’s natural defences to fight the cancer. It uses substances made by the body or in a laboratory to improve or restore immune system function. White blood cells, also called leukocytes/leucocytes, are the cells of the immune system that are involved in protecting the body against both infectious disease and foreign invaders. James P. Allison was born on 7 August 1948 in Alice, Texas, USA. Now, he is the Director of the Parker Institute for Cancer Immunotherapy at The University of Texas MD Anderson Cancer Center, Houston.
This year’s prize for Science is in the area of Mathematics. It has been awarded to Prof Sir John Macleod Ball of UK, for his fundamental and groundbreaking contributions to nonlinear partial differential equations, the calculus of variations, and dynamical systems. In these areas he developed revolutionary approaches that are widely used in mathematics today. John Ball was born on 19 May 1948 in Farnham, Surrey, UK. Now he is the Sedleian Professor of Natural Philosophy Director of the Oxford Centre for Nonlinear Partial Differential Equations Fellow of the Queen’s College.
The prize consists of a certificate, hand-written in Diwani calligraphy, summarizing the laureate’s work; a commemorative 24 carat, 200 gram gold medal, uniquely cast for each Prize; and a cash endowment of Saudi Riyal 750,000 (about US$200,000) to be shared equally.
Reported by Sameen Ahmed Khan (Salalah, Sultanate of Oman) ([email protected])