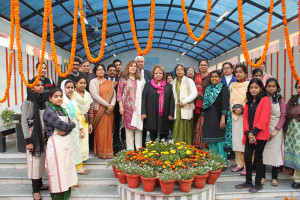 New Delhi: A canteen run exclusively by women and operated by Ekta Self Help Group (SHG) was inaugurated in Jamia Millia Islamia, last month by Salma Ansari, wife of Hamid Ansari, Vice-President of India. The SHG is constituted for women from Jamia’s neighbourhood under the aegis of Dr. Zakir Husain Memorial Welfare Society (ZHMWS). The Jamia’s Outreach Programme arranged for the training of this group for effective business plan and entrepreneurship. Prof. Talat Ahmad, Vice-Chancellor, Jamia Millia Islamia has taken a keen interest in providing gender equity to the campus and this canteen is a major step in this direction. The Ekta Team is comprised of about 20 women headed by Shabana Towhid. It is expected that this opportunity provided to Ekta by Jamia Millia Islamia will lead to economic empowerment and confidence-building amongst the woman of Jamia’s neighbourhood and integrate the neighbourhood with the University on gender sensitivity and institution-society linkage.
There was great enthusiasm amongst the students on the opening of this new canteen and they could be seen eagerly trying new dishes on offer. It may be added that “Dastarkhwan” will build its image through fresh and hygienic food which would be prepared by the women workforce on the spot and served piping-hot or freezing-cold as the case may be, to the Jamia students’ fraternity.
(Twocircles.net)