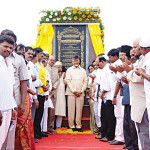 Kurnool: Foundation stone here was laid for an Urdu University at Orvakallu village in Kurnool district on November 9 by Andhra Pradesh Chief Minister N. Chandrababu Naidu. The University will come up on 125 acres of land. The Chief Minister spoke about Urdu’s old connection with Andhra Pradesh and said the University will be part of the Educational Hub planned at Kurnool. A university dedicated to non-conventional energy will also come up in the Hub. He said an international airport will also be set up at Kurnool. Of the 900 acres for the Educational Hub, 125 acres have been set aside for Urdu University.
The post-Telengana residual Andhra Pradesh has a mere 4% Muslim population. Major concentration is in Kurnool and Kadapa district and some cities on coastal belt.