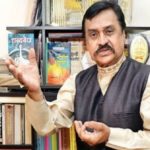 Mumbai: In a quiet, sea-facing flat in Mumbai’s Colaba, Pandit Ram Sagar Prithvipal Tripathi, or simply Sagar Tripathi, reverentially opens Saibaan-e-Rahmat (Tent of Mercy), his collection of ‘natiya shairi’ or devotional poems penned in praise of Prophet Muhammad. He has become a famous face at mushairas for his poetry, and in particular for always opening his session with a ‘hamd’ (penned in praise of God) and a ‘natiya kalam,’ a panegyric extolling the Prophet and his message.
In his house, dozens of awards and citations that he’s won for his works jostle for space with copies of the Quran, biographies of the Prophet, the Bhagavad Gita and the Ramayana. Behind a huge sofa are placed several prayer mats that he spreads often for Muslim guests who want to pray if they wish to.
Tripathi’s collection of poems on the Prophet unambiguously declares his yearning for peace and communal harmony.
“Prophet Muhammad doesn’t belong to Muslims alone. He is for humanity, and there is nothing wrong if I seek some blessings from him,” says Tripathi. He captures this belief in a couplet: ‘Sirf ek quom ke nahin hain woh/Rahmate aalminee hain aaqa (He doesn’t belong to just one community/He is mercy for the universe).’
Born in a village in UP’s Sultanpur district, Tripathi says there was a lot in his background to prepare him for a career as a poet, though he earns from his business, properties investments and shares. While he was an undergrad and masters’ student at Allahabad University, he came under the tutelage of the famous Urdu poet Raghupati Sahai Firaq Gorakhpuri. His grandfather wanted him to become an IAS officer and had bought a house for him near Firaq’s place, but Tripathi never sat for the UPSC exams as he fell in love with poetry. His passion grew as he got dazzled by the leading lights of Urdu poetry.
(Extracted from timesofindia.indiatimes.com)