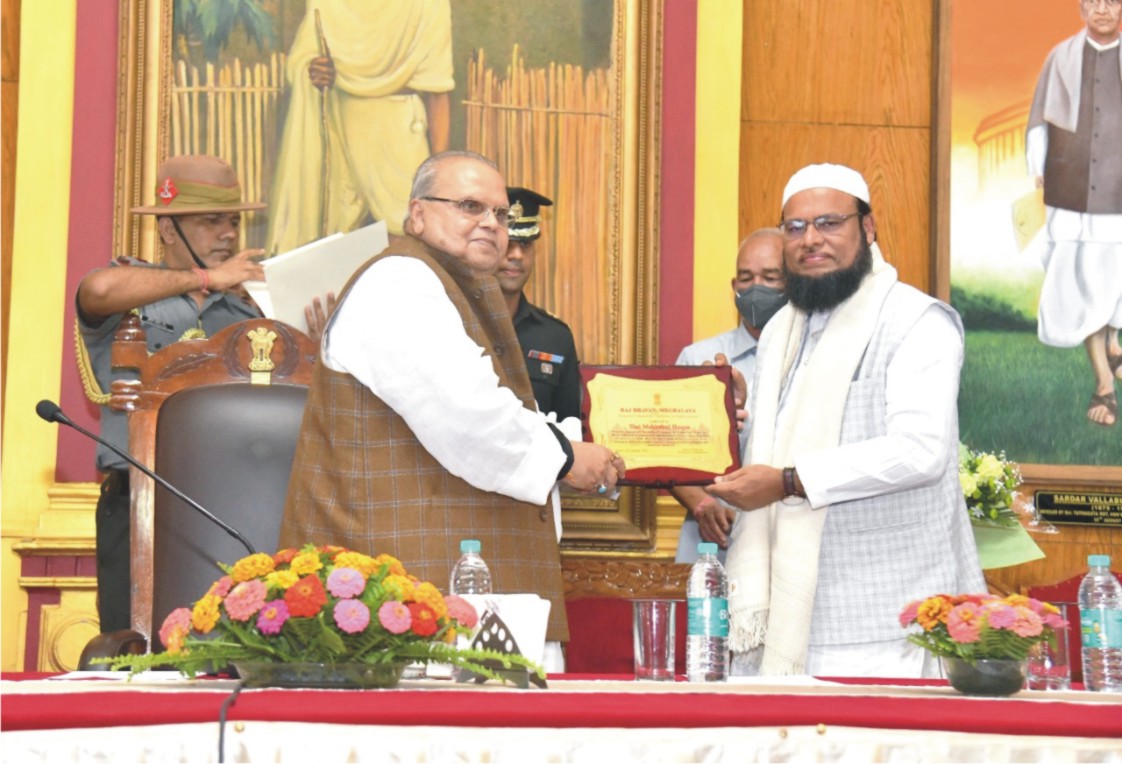 A B Masoud 0 October, 2022 11:59 am
Can India, a Hindu Nation, find a solution to the Hindu Muslim Conflict?
Salaam Centre’s book stall
Charter of Makkah: A Blueprint for Global Harmony

Shillong: For his exceptional achievements in the sphere of education, Mahbubul Hoque, the founder and chancellor of the University of Science and Technology Meghalaya, received the “Governor’s Award for Excellence in Public Service-2022.” On August 27, at a ceremony held at Raj Bhavan, the honour was given to him by Meghalaya Governor Satya Pal Malik.

Governor Malik, who presented the awards for excellence, praised Mahbubul Hoque as a visionary educator who is dedicated to creating institutions that cater to rural communities. Everyone has noticed the impact he has had on the education sector as a result of his passion and unselfish contribution to the cause of education

Hoque thanked the Governor and the people of Meghalaya for accepting the award and for allowing him to help the community by promoting higher and technical education as well as several outreach initiatives. He recalls the assistance provided by the late Dr. Donkupar Roy, former Lok Sabha speaker and Chief Minister P. A. Sangma, former Governor R.S. Mooshahary, and the officers’ overall support.

Mahbubul Hoque is also lovingly called Sir Syed of North East for his selfless work in the education sector he was raised in a rural household in the isolated Purabgul village in Assam’s Karimganj district. He had a difficult childhood because he lost both of his parents and his caring older brother. He had to work to pay for his education by giving tuition and selling vegetables he had grown himself at the neighbourhood market. He received numerous employment offers from MNCs and domestic and international IT businesses after earning a Master’s in Computer Science from the esteemed Aligarh Muslim University, but he chose to return to his hometown with a vision and began a career in educational entrepreneurship.

With barely 85 rupees in his pocket, he began his humble endeavor in Guwahati with 1 computer and 4 students in a rented room. To raise money to set up a computer lab, he manufactured computers and sold them in the market. At first, his situation was so difficult that even landlords were reluctant to rent to him because of his financial situation. However, his study center, Central IT College, rose to become the second-best Manipal Group study center in the entire nation. There was no turning around.

He established the Education, Research and Development Foundation (ERDF) in 2005 while serving as its chairman to improve the North Eastern region’s educational infrastructure. One AICTE-approved engineering college, two PCI-approved pharmacy colleges, one BCI-approved law school, one AICTE-approved business school, one NCTE-approved B. Ed. college, one women’s college, and his largest dream venture University of Science & Technology Meghalaya where more than 5000 students are enrolled are among the pioneering educational institutions that were established under the ERDF umbrella. An exceptional accomplishment, the University received an “A” Grade from NAAC in its first round of assessment in 2021. USTM is now placed among the top 200 universities of India in the NIRF-2022 Ranking.

More than 10,000 students are receiving quality education from the institutions he founded, 35% of whom are from indigenous tribes, 20% are from poor, backward classes, and receive free education, 80% of whom are from rural areas, and 57% are female students. Under his dynamistic direction, more than 1200 teaching, administrative, and non-teaching staff members are working to advance the schools. More than 30 students from communities and tribes throughout the northeastern states attend the institution, which is one of its most significant aspects.

Mahbubul Hoque, who has received the “Shikshacharya Award-2019” from the Asam Sahitya Sabha as well as numerous other honours for his work in higher education, including the most recent

Community Excellence Award given to USTM by UNESCO, has started several charitable initiatives like endowment funds, emergency medical assistance, interest-free loans, relief drives, health camps, etc. He is very concerned about energy conservation and environmental protection, which is evident in his adoption of the Green Campus Initiative, for which USTM has already won numerous accolades by the UN’s sustainable development goals.

As part of the USTM Neighbourhood Mission, different USTM departments have adopted nearby communities, and the children of these towns can receive free or reduced-price education at the university. Mahbubul Hoque’s creation and implementation of the Pay Back Policy, which reimburses full course fees to students who pass competitive tests, is a noteworthy initiative.

The USTM future roadmap includes research and extension initiatives that are centered on rural education and reaching its Milestones. By drawing students and scholars from all over the world, fostering local youth, and building a global community, he has established milestones to transform USTM into a world-class university by 2030, assisting the state of Meghalaya in becoming a destination for international education. His present vision for Meghalaya is a medical school and hospital with cutting-edge research capabilities. Another aspirational proposal put out for adoption by the Assam government is the establishment of a women’s university in his hometown of Karimganj.

AUTHOR: A B Masoud