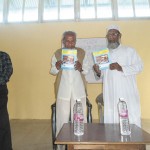 Imphal: A prominent literary body of the Manipuri Muslims, Writers’ Union, Manipur (WUM) released its Manipuri journal Pambei at a function organised at the Convention Hall of Sadar Bazaar Jame Masjid in Imphal, last fortnight. Manipuri Muslim writer, Mohd. Abdur Rahman and Imam of Jame Masjid, Maulana Ziauddin, released the journal. Editor of Pambei, M.M Ahmed said, “Muslim Writers’ Forum, now renamed Writers’ Union, Manipur, had launched the first issue of Pambei in September 2003. Benjamin M Shah was the editor. It was the well-known Muslim writer, Kayamuddin Pukhrimayum who initiated to launch this particular journal. Sadly, he could not survive long to see the publication of this journal. He passed away a few months before the release of the journal on 13 July, 2003, in a road accident. Due to various reasons, including lack of encouragement from the public, the second issue had to be released in June 2009 after a very long break. Today, in February 2013, we are releasing the third issue of Pambei”.
(Reported by Dr. Syed Ahmed, TwoCircles.net)