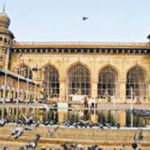 Charminar: Months after the state government announced that it would spend as much as Rs 10 crore on the historic Mecca Masjid for its conservation and also for providing better facilities for visitors and worshippers, the funds have not been released. It was in May last year that a group of legislators, including the deputy chief minister Mohammed Mahmood Ali and other officials, visited the Mecca Masjid ahead of the holy month of Ramadan for inspection. During the visit, they found several issues such as water seepage from the ceiling, which needed to be addressed urgently. Officials from the masjid who did not wish to be identified said that the same problems continue to plague the historical structure. “Apart from some toilets being built by the Greater Hyderabad Municipal Corporation, little has been done for the masjid’s maintenance. The promised funds have not arrived. The issue has not changed since the time of the Congress government,” said an official.
Another official said, “A large number of CCTV cameras are not functioning. The issue was brought to the attention of the Minorities Welfare Department, but so far little has changed on the ground. The CCTV system needs an immediate overhaul,” the official said. The staff have not received their salaries for three months. (TOI)