The delay in establishing the Waqf Tribunal is also adversely affecting the administration of the Auqaf. 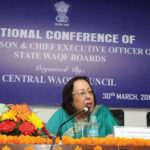 The Union Minister for Minority Affairs, Dr. Najma A. Heptulla addressing the National Conference of the Chairperson and Chief Executive Officer of State Waqf Boards, in New Delhi on March 30, 2016.

New Delhi: In an annual national conference of Chairmen and Chief Executive Officers of State Waqf Boards, Najma Heptulla, Union Minister for Minority Affairs pulled up waqf boards for not performing their work and expressed concerns over the indifferent attitude of some of the State Waqf Boards. Speaking during the conference, Heptulla said, “Let me assure you that our government is committed to curbing the menace of illegal occupation of Waqf properties and is in the process of bringing standalone legislation”. The legislation, called “The Waqf Properties Eviction of Unauthorised Occupants Bill”, is along the lines of the Public Premises Act. It seeks to provide a faster mechanism for eviction of unauthorised occupants and is a UPA hand-me-down. It was tabled in the Rajya Sabha in February 2014 towards the end of the UPA regime and was referred to a standing committee. Heptulla said many waqf boards and states had not implemented, or had only partly implemented, important provisions of the Waqf Act such as survey of waqf properties, constitution of waqf tribunals, framing of rules and regulations, timely re-constitution of state waqf boards and appointment of a full-time chief executive officer. She also said that most States have not established the three member Waqf Tribunals as provided for in the Act and as directed by the Supreme Court, to establish within four months from December 15, 2015. There are only 14 Waqf tribunals that have been established covering 16 State Waqf Boards, she said adding, “The delay in establishing the Waqf Tribunal is also adversely affecting the administration of the Auqaf.”
(Extracted from twocircles.net)