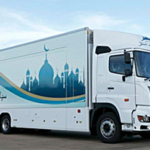 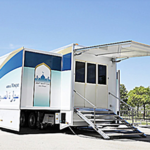 Tokyo: A large white and blue truck pulls up outside a stadium in central Japan and slowly expands into a place of worship. Welcome to the Mobile Mosque!
As Japan prepares to host visitors from around the world for the 2020 Summer Olympics, a Tokyo sports and cultural events company has created a mosque on wheels that its head hopes will make Muslim visitors feel at home, says an Associated Press release. Yasuharu Inoue, the CEO of Yasu Project, said the possibility that there might not be enough mosques for Muslim visitors in 2020 is alarming for a country that considers itself part of the international community. His Mobile Mosques could travel to different Olympic venues as needed. “As an open and hospitable country, we want to share the idea of omotenashi (Japanese hospitality) with Muslim people,” he said in a recent interview.
The first Mobile Mosque was unveiled recently outside Toyota Stadium, in Toyota City, which is also the headquarters of the car company with the same name. The back of the modified 25-tonne truck flipped up to reveal an entrance and then the side slid out, doubling the width of the truck. The 48-square-metre room can accommodate 50 people. Guests can pray inside the mosque, which includes outdoor taps and a washing area for ablution.
An estimated 100,000 to 200,000 Muslims live in Japan. n