Islamic Voice 0 January, 2013 12:00 am
Poverty Afflicts over Half the People, One-Third live in Rented Houses
Mandate-2014
Pension for Islamic Scholars 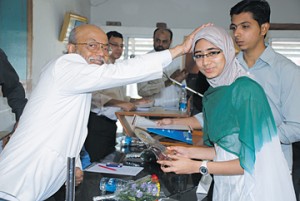 The Muslim Students Education and Welfare Organization (MSO) felicitated 150 meritorious Muslim students for scoring 90% and above marks in the SSLC (Class 10th) and Pre University examinations in 2012 at a function on December 16.
Eminent space scientist from the United States Dr. Nazeer Ahmed, who is presently the Executive Director, World Organization for Research and Education in USA, was the chief guest. While addressing the gathering, he asked students to develop scientific spirit in them through an inquisitive approach under the light of the Quran and Hadith. He asked the students to make attainment of knowledge a lifelong mission rather than merely passing the exams. Others who participated included Syed Tanveer Ahmed of Karnataka Muslims, Azam Shahid, professor of Economics, Taj Mohammed Khan, Secretary, Rifaul Muslimeen, Mysore and Prof. Maher Mansoor, former Official from the Indian Postal Services.
Moulana Ashraf Ali Rashadi, Khateeb, Masjid-e-Meraj, Bangalore presided. Syed Shahid Ahmed, President, MSO received the dignitaries, Mr. Mohamed Ziaulla welcomed the guests and Mr. Asif Ali, Gen. Secretary, MSO conducted the programme.