The steady growth of Muslim Cooperative Bank in a small city like Mysore is creditable as the community has a poor track record in running the financial institutions in Karnataka. 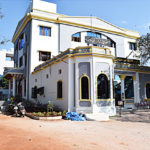 Mysuru: The Muslim Cooperative Bank which has completed a century of its founding, will be commissioning its newly constructed building in January. The new building located behind the old edifice on Sayyaji Rao Road in the city, is a gleaming structure with modern facilities, a well-fortified strong room, and lockers, a board room and more spacious lobby for customers.
The bank was founded in 1916. Curiously, the bank does not have any clue about its founders as no records to the effect survive. However, the old bungalow where it functioned since 1945 is said to have been purchased from an Englishman in 1945. The new headquarters of the bank has been constructed on its rear side.

Steady Growth
The saga of survival and steady growth of Muslim Cooperative Bank in a small city like Mysore is creditable as the community has a poor track record in running the financial institutions in Karnataka. While the Bangalore Mercantile Cooperative Bank founded in 1990s vanished after a short life, the Amanath Cooperative Bank, which served the community for nearly three decades, had a rough patch for a decade. It can be only said to be limping towards recovery. The Al-Ameen Islamic Financial Investment Corporation disappeared without a trace within a decade of its commencement.
The Muslim Cooperative Banks’s current President, Mir Humayun speaking to Islamic Voice said, the Bank has nearly 1,500 depositors, of which 700 have current accounts. Its reserve funds amount to Rs. 4.95 crore. The Bank has, besides its main office on Sayyaji Rao Road, three branches at Udayagiri, Rajivnagar and in Hunsur (a town around 40 kms south of Mysore).

Reserve Funds
According to the Bank’s report released on the eve of the Annual General Body meeting on September 24, 2017, the Bank’s deposits stood at Rs. 68.50 crore and the total loans amounted to Rs. 39 crore. According to the projections, the Bank wishes to raise the deposits to Rs. 100 crore and extend loan amount to Rs. 75 core by 2018. The paid up capital of the Bank is stated to be Rs. 3.30 crore contributed by shareholders. The four units of the bank employ 45 members.

Rs. 1.03 Cr. Profit
The Report says the Bank earned a profit of Rs. 1.03 crore during 2016-17 and recommended 10% dividend for their shareholder. The new building offers the bank 105 cents of space to expand its services. It says performance was creditable despite demonetization which led to huge withdrawals and transactional difficulties suffered by the depositors for three months.
Mr. Humayun said the Bank is upgrading facilities and will soon have ATMs and will provide facilities under Core Banking Solutions under which the depositors will be informed whenever money is credited into or debited from their accounts. It will also have RTGS and NEFT facilities through which money could be repatriated from one account to another. The new headquarters building is likely to be inaugurated by Chief Minister Siddramaiah in January.