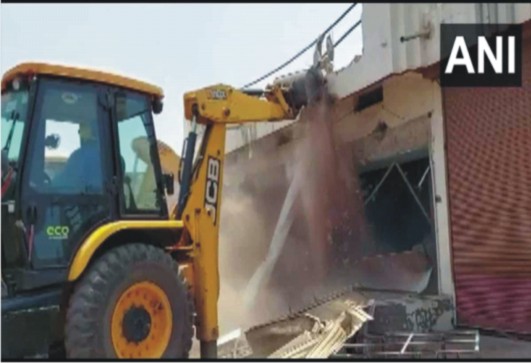 New Delhi: Community and rights organizations have slammed the BJP-led Uttar Pradesh government for demolishing Muslim homes in flagrant violation of the constitution. After Kanpur and Saharanpur, the UP authorities in Allahabad razed the house of social activist Javed Mohammad in the presence of a large police force who was made the mastermind of the violence that erupted during the protest on Friday.

All India Muslim Personal Law Board described the action as a brazen violation of the constitution. Does our law of the land allow demolishing someone’s house for protesting or throwing stones for that matter? Does it allow shooting down and killing someone for sloganeering “Islam Zindabad”? The Board’s General Secretary Maulana Khalid Saifullah Rahmani asked.

He said that the demonstration of lawlessness by the government in treating the accused of a crime as convicted criminals even before the crime is proven is exceedingly tragic and is a form of violence by the State in itself.

Those who are peacefully protesting against BJP leaders’ indecent acts and hate speech are facing cases being registered against them, lathi-charge, and their houses being demolished, he added.

“Unless a person is found guilty by a court of law—he/she is only an accused and to treat them as a criminal is nothing but ‘anarchy’. On the other hand, a person whose criminal activity is out in the open, publically available in the media, and the crime has even been acknowledged—the political party has only suspended her without state authorities taking any meaningful action against her. This is a complete miscarriage of justice”.

He said the All India Muslim Personal Law Board demands immediate release of those arrested in the aforementioned cases and cases against them, if any, be brought before the courts of law as per the procedure established by law.

The Board also appeals to Muslims to be patient; present memorandums to local government officials to express their displeasure towards the hate speech against Prophet Muhammad (PBUH); gather evidence of police brutality and share such evidence with social organizations to register FIRs.

Another organization Jamaat-e-Islami Hind (JIH) also vehemently condemned the highhandedness of the police and administration. JIH President Syed Sadatullah Husaini, “what the police have done in Uttar Pradesh and Jharkhand concerning the democratic protest by Muslims on June 10, amounts to throttling democracy and rule of law.”

The JIH President appealed to the Muslim community not to fall into the trap of anti-social elements and those who wish to create division within society while exercising their democratic rights for conducting peaceful protests.

Reiterating his stand, Husani said, “pulling down the houses of someone simply because one criticizes the policies of the government which he considers against the larger public interest or shooting someone protesting to express his/her grievance is something unimaginable for any civilized society. This smacks of vendetta politics. We condemn it in the strongest terms and feel that it sends a wrong message to the people of our country creating more unrest among them and reducing their confidence in the impartiality of the government.”

Husaini said, “The JIH feels that the action was taken against Javed Mohammed, a well-known social and human rights activist in Prayagraj in Uttar Pradesh, smacks of vendetta politics. He also reminded that Javed and his family denied that any of them had taken part in Friday’s (June 10) protest and that the house demolished was also owned by his wife and not him.

Popular Front of India National Secretary Muhammed Shakif said the casualties during the protest were the result of an arbitrary crackdown by the police and so there should be an impartial investigation into the incidents of firings against unarmed protestors.

“There were also reports of Hindutva mobs pelting stones at peaceful protestors in Ranchi. Apart from this the relatives of one of the boys who was killed in the firing in Ranchi have raised doubts about whether the fatal bullet was fired from the Hindutva groups or by the police. The Jharkhand being a non-BJP ruled state, it should also be investigated whether the Hindutva miscreants were purposefully creating problems, “he said.

Human rights groups NCHRO also condemned the vengeful bulldozer policy of the BJP in Uttar Pradesh. It said instead of taking action against Nupur Sharma and Naveen Jindal, the BJP government in UP under Ajay Singh Bisht, also known as Yogi Adityanath, has decided to bulldoze the houses of the accused.

“The bulldoze-police has been used against anyone the BJP wants to silence and is their tactic of intimidation. Needless to say, it is highly vengeful and has nothing to do with the constitutional way of dealing with such cases. Bulldozing a house also means everybody who lives in that house will become homeless. It is an attack on the entire family of an accused.”