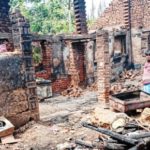 Samserganj: Muslim residents of a West Bengal village have raised money to rebuild the houses of six Hindu families gutted in a fire, after an appeal for assistance to an eid congregation at a local mosque. A sum of 49,000 rupees was collected and distributed among the families in Samserganj, a village in Murshidabad district. The 26 members of these families now stay inside the compound of a child welfare center in tents provided by local authorities. The blaze started on June 14 in the house of Phulkumari Bhaskar while cooking and soon spread to other homes, fed by a gas cylinder that exploded. “We discussed the matter with the secretary of the village Idgah committee, Lutfal Haque. During eid on June 16, the secretary appealed on the public address system to nearly 3,000 villagers taking part in the prayers to donate money,” said Mohammad Abbasuddin, a schoolteacher. Santosh Bhaskar, 43, left homeless by the fire, said he was “touched” and described the donations as a “boon at a time of distress.” Block development officer Joydeep Chakraborty said the aid as “was a very good gesture.”
(Taken from mattersindia.com)