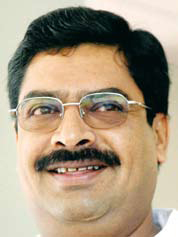 Mr. Naseer Ahmed, MLC and industrialist, who took over as the new Chairman of the Amanath Cooperative Bank aspires to put the Bank back on the rails. Naseer Ahmed was formally  elected the Chairman on October 3 when the newly elected Board met for the
first time. Hailing from Kolar, Mr. Ahmed owns garments factories that employ nearly 4,000 workers and has served as MLA from Kolar during 1999-2004. He is currently a member of the Karnataka Legislative Council. It may be recalled that a new 11-member
Board of Directors was elected for the Amanath Bank which had completed five years after Government took over the reins of administration amid scams and mounting default cases.

Talking to Islamic Voice, Mr. Ahmed said it is a miracle that the Bank kept functioning for the last five years despite being
under government control and people still had confidence in it. He said the Bank could mobilize Rs. 5 crore in fresh deposits ever since the new board of directors took charge earlier this month. He said no major business activity could be taken up during the last six years as the Bank was mired deep into litigation against the scamsters and defaulters. He informed that a whopping sum of Rs. 66 crore was spent towards litigation during the period which amounted to  nearly 20 per cent of the Bank’s total deposits. He said the Bank
has even secured the approval of the Registrar of Cooperative Societies for one time settlement (OTS) to negotiate the terms of return of loans with minimum interest. He said the Bank would soon launch a drive to invite defaulters and settle each case in the larger
interest of the Bank as it was ‘a Community Asset’. Mr. Naseer Ahmed said the hunt was on for a new CEO for the Bank. The Bank would come up with new schemes to issue vehicle loans, housing loans and gold loans in future and will finance the entrepreneurs
in a big way. A window will be opened towards extending micro credit facilities to  hawkers, small vendors to develop economy of those below poverty line.