Nitish Kumar ditches the firmly secular but overbearing ally for an old but loyal partner who will certainly expand its ideological sway. 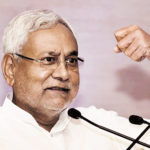 With Bihar having fallen in the National Democratic Alliance(NDA) kitty with the collapse of the Mahagatbandhan (Grand Alliance), the scenario for the United Progressive Alliance (UPA) has turned bleaker for the 2019 General Elections. By deserting the ‘Grand Alliance’, Bihar Chief Minister Nitish Kumar has signaled that he foresees a better future for himself in the NDA in years ahead and given the choice of siding with the corrupt and the communal, he is more comfortable with the latter.
The drama unfolded in the state capital on July 26 in a quick sequence. Though Mr. Lalu Yadav, the chief of the Rashtriya Janata Dal (RJD), was in shock, it seems that the script had been meticulously prepared for the shift of power from one alliance to another, albeit under the same leader. The new alliance government headed by Nitish is likely to have a smooth sailing what with BJP and allies with 57 MLAs will be partners in the Government headed by leader of the JDU which has 71 seats in the 234-member house.
What is more galling for the forces upholding democratic and liberal governance is that the central illiberal dispensation gets an expanded sway in the Hindi heartland. Even more regrettable is the fact that endemic corruption and dynastic traditions within the secular-liberal forces is proving to be their nemesis.
But the real fear is that with the NDA regaining the foothold in the state via Nitish Kumar, the right wing extremists will have huge advantage in taking forward their venomous campaign against the minorities and Dalits. Nitish’s hands will be tied in matters of initiating action against communal forces with BJP sharing power. Bihar having given a landslide mandate to the RJD-JDU-Congress combine (Mahagatbandhan) had been the frontline state in resisting BJP’s expanding frontiers in the Hindi heartland. Of course, himself a liberal-socialist, Nitish will be vulnerable to right wing machinations, dependent on BJP’s support as he would be.
The transition in Bihar should have some certain sobering lessons for the secular-liberal forces. It must be clear to them that they need to be aware of the casteist and corrupt elements and dynastic tendencies within even while being secular and liberal.
It is to be seen how long Nitish can continue with the NDA this time. Within the new combine he is the only mass leader. BJP Bihar chief Mr. Sushil Modi does not have a mass appeal. As of now it is not certain if Nitish can carry the entire party with him as Mr. Sharad Yadav, the party’s leader at the Centre has not been heard about the changeover in Bihar. Observers do not discount the possibility of dissidence within the JDU legislature party as ideologically the two components i.e., the JDU and the BJP are poles apart. While Nitish Kumar could be pardoned for his previous somersaults which stemmed from ideological differences with the core NDA parties, the current about-turn may be purely because of the overbearing attitude of the Lalu Yadav and his two sons who held important portfolios. All that can be said as of now is that Bihar’s exit from the Mahagatbandhan is a grave loss for the secular and liberal forces. Nitish Kumar ditches the firmly secular but overbearing ally for an old but loyal partner who will certainly expand its ideological sway across the Hindi heartland in the ideological flux.