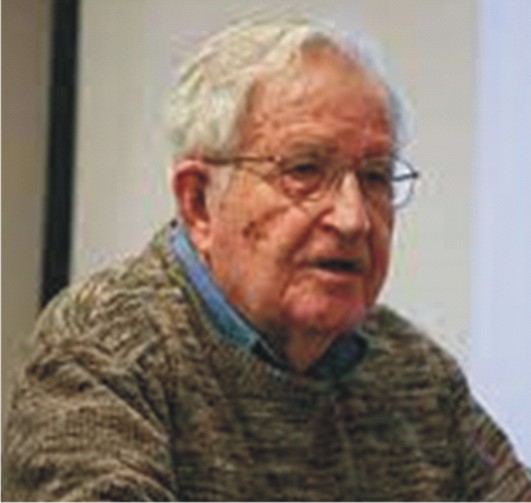 People born with a predisposition to learn a language: Prof Noam Chomsky

Aligarh: Professor Noam Chomsky, a well-known thinker, linguist, philosopher, and cognitive scientist, explained why humans have the capability for language and the ability to utilize it in infinitely creative ways.

He gave an online talk on February 11 at Aligarh Muslim University’s Department of Linguistics on “The Human Capacity: Language and Thought.”

He stated that people are born with a predisposition to learn a language and that humans have been naming and describing things since the dawn of time to inform others about what is going on around us.

Celebrated linguist claims that the human brain is ready to learn language quickly at certain phases of development.

He talked about the importance of cognition in language acquisition and development and linguistic aspects that influence general cognitive development.

“The human mind comprises an extensive cluster of innate ‘modules,’ one of which is language. Each module operates automatically, independently of individual control, based on a distinct, domain-specific set of rules that take determinate inputs from some modules and yield determinate outputs for others. The various modules interact in complex ways to yield perception, thought, and a large number of other cognitive products,” said Prof Chomsky.

Speaking about language acquisition, he indicated that children are born with an inbuilt aptitude to acquire language, and that grammar is a crucial skill for children to learn language.
He ignored the importance of imitation alone, especially when the adult is utilizing a framework that the youngster has not yet begun to employ.

“I also like to believe that language is complex and with an unlimited combination of sounds, words, and phrases, the environmental learning is not able to account for language acquisition alone,” said Prof Chomsky.

“We were fortunate to have Prof Chomsky here (virtually), and our students, faculty members, and scholars from around the world have had the opportunity to interact with one of the most influential scholars and brilliant minds in the world,” said Prof M J Warsi, Chairman, Department of Linguistics, who conducted the programme.

“Prof Chomsky’s talk, as usual, was deeper and intelligent, connecting numerous points to answer many of the complicated questions,” he said and adding that, “It is a rare privilege to have this legend with us that may prove transformational in ways to many of us that we cannot imagine right now”.

The web discussion drew over 1000 participants from all around the country and throughout the world.