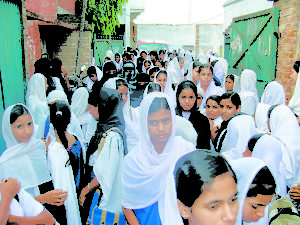 Bengaluru: Bengaluru happens to be the largest hub of modern educational institutions run by Muslims. The community currently runs around 300 English medium high schools in and around the city. Urdu is though taught in some schools, the community has not insisted on it being taught in privately owned schools. In fact all the Urdu medium schools are run by the Government alone. Of late, great momentum has been seen in matters of setting up English medium schools in the City as well as Karnataka. It is precisely this initiative that has resulted in Muslim representation increasing in the private job sector in the city.
The community has set up high schools under various boards and councils i.e. State Board, CBSE, ICSE and IGCSE. The quality of some of the high-end schools is quite remarkable inasmuch as some of them even have even 80% of non-Muslim students on their rolls. Our survey of performance in SSLC examination this year leaves out many of such schools as they, while being run by Muslims, are not serving the community. They are being run for profit, even though, the stated objective remains social service rather than profit.
Bengaluru expanded enormously during the last 25 years, its population having soared from four million to well around 10 million now. The city is today major hub of technically qualified youth who hail from every single destination within the country. Great many schools have come up in every conceivable place in the city. Pining for English medium education has led to the emergence of a new class of educational entrepreneurs. Muslims were not behind in envisioning the business prospects. Muslim-run schools have mushroomed all over the city.

Children are poorly trained
But two trends are distinctly observable. First, though most of the schools set up by the community produce English literates, quality education is a far cry. Children are poorly trained in matters of linguistic skills. A degree-holder can barely speak cogently on a given topic for two minutes. Scoring high marks is the objective rather than acquiring sound knowledge of affairs of administration and governance, skill of articulation, and they hardly contribute to enhancement of Muslim representation in the Government and public sector.
The community also betrays a herd mindset with youth rushing for careers in technology and marketing to the exclusion of all other sectors. Fields like Literature, Journalism, Film, Fine arts, Agriculture (and allied fields such as Veterinary, Horticulture, Fisheries, Dairy and Poultry Science) remain barren of Muslims. Hardly anyone heads for courses in History, Geography, Sociology, Political Science, Law, Chartered Accountancy, Architecture etc.