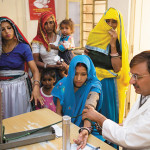 How much India spends on public health?
By 2012 when the 11th Five Year Plan period came to an end, India’s expenditure on public health stood at 0.9% of the Gross Domestic Product.
The World Health Organisation (WHO) recommends an expenditure of 5% of the GDP. India finds it difficult to spend that much and experts estimate that 2.5% could be achievable by the end of the 12th Five Year Plan (i.e., 2012-17). But even this was found beyond the limits and the Planning Commission cut it down to 1.58%.
We are now towards the end of the third year of the 12th Five Year Plan period. Estimates gathered so far suggest that even the set target of 1.58% may not be achieved. It stands at merely 1.16%.
Rough estimates reveal that 70% of health expenditure comes from the private sector which has been growing exponentially ever since the dawn of liberalisation in 1991. Nearly, 70% of the healthcare cost too is borne by the patients themselves. This gives India the dubious distinction of having one of the most privatised health systems. In contrast, 70 to 80% of health services are provided by public sector in China.
Public Health Care Expenditure in some countries
In 2010, according to WHO, India was spending $39 per person on health from public expenditure. Compare this with some other countries: Costa Rica $845, Chile $578, Brazil $483, South Africa $412, Malaysia $356, Thailand $247, China $203, Sri Lanka $66, Nepal $22, Pakistan $22, Bangladesh $08.
Health Administration in India
India’s Ministry of Health and Family Welfare follows a 3-tier health care administrative structure:
1- Sub Centre (SC): To establish one SC for every 5,000 people in the plains and one SC for every 3,000 people in tribal and hilly areas. An SC consists of one auxiliary nurse midwife and multipurpose health worker.
2- Primary Health Centre (PHC): One PHC for every 30,000 people in the plains and one PHC for every 20,000 people in the tribal and hilly areas. Each PHC should have one medical centre and paramedical staff and is supposed to supervise 6 sub-centres.
3- Community Health Centre (CHC): One CHC for population of one lakh population. CHCs should have specialists including surgeons, obstetricians and gynaecologists, paediatricians and physicians.
Where the Lacuna Exists?
Going by the above prescribed SCs, PHCs and CHCs, the current strength reveals that there is a shortfall of 20% in Sub Centres, 23% in Primary Health Centres and 32% in matters of Community Health Centres across the country. Due to this deficiency, the patients who are not able to get access to SCs or PHCs, have to ultimately approach CHCs which get crowded and deliver poor services.
Kerala and Goa had the best healthcare infrastructure in the country. The southern states fared better among the four regions of the country. Uttar Pradesh, Gujarat, Madhya Pradesh, Chhattisgarh, Odisha, Haryana, Uttarakhand and Himachal Pradesh are the worst performers.
Going by the yardstick of the Ministry of Health and Family Welfare, UP should have 31,037 SC, 5,172 PHCs and 1,293 CHCs. But it had only 20,521 SCs, 3,692 PHCs and 515 CHCs. Bihar came next followed by Rajasthan and Madhya Pradesh in matters of shortfall from the set target.
But some of the southern states were performing better than what was prescribed. For instance, Kerala should have 3,525 SCs but it had 4,575 of them. Against required 586 PHCs, it had 809 and against 146 required CHCs, it had 217. Tamil Nadu too had more number of these centres than was required.

Some Salient Facts about Public Health in India