Delays, inappropriate replies, murder of activists have proved to be the bane of the RTI act during the decade-long application of the Act. 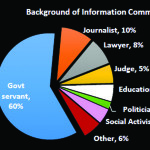 Right To Information (RTI) Act came into force in 2005. It is ten years since it is in operation. How has it fared? Has it brought accountability in the administration? Has it been successful in addressing the people’s grievances?
The RTI Assessment and Analysis Group (RAAG) in collaboration with Transparency Advisory Group (TAG) has recently produced a report titled “Who Uses the RTI in India and for What?”. The 13-member research team of activists was led by Amrita Johri of Satark Nagarik Sangathan (Organisation of Alert Citizens). The Report was published in November 2014.
How it worked?
Let us have a look at how the law has worked.
General perception on the official side is that the law is being widely misused for frivolous and vexatious purposes. On the users’ side, the general complain is that the delays that afflicted the courts in India, have infected the RTI process too.

Content
Thirty four per cent of the RTI applications asked what action had been taken or was proposed to be taken on decisions, issues, complaints, requests, applications, etc. 27% of the applications were seeking information about financial and public resources, 22% about human resources, and 20% about the status or findings of enquiries and investigations.

Waiting Period
The Report says that if general pendency of application is reviewed, it could be calculated that it would take 60 years for all applications to be replied in Madhya Pradesh and 18 years in West Bengal, given the current rate of pendency and clearance. As a whole, 962,630 applications were pending for clearance at the end of the year 2013-14. The number was 626,748 at the end of 2009-10. The long waiting period is negating the very existence of the law. As per the Act, the officials are supposed to submit the replies to the applicants within 15 to 30 days.
In less than 3% of cases, penalties were imposed on government departments denying information to the applicants.
In 2009-10, 1847 public authorities were registered with the Information Commissions making them responsible for replies to the public. The number had gone up to 2,276.
Horrendously, so far 40 activists who had sought information with potential to expose the corruption within the officialdom have been killed so far.

Whimsical Interpretation
It is also revealed that officials interpret the law in whimsical fashion. Though various public authorities and information commission have chosen to interpret the law to mean that applicants can only ask for records and documents, actually a majority of the applications in our sample asked for a response (68%), with only a 44% asking for documents. For instance, in one case, an applicant asked whether it was true that the Prime Minister had travelled to the USA last year, and if so, please supply a copy of his travel details and the cost of travel. The Public authority answered that as the first question asked for required a yes or no answer, it was disqualified, and as the subsequent questions were conditional on the answer to the first question, they were also disqualified. Therefore, no answer.

Action Needed
Each authority should appoint Public Information Officer (PIO) for complete, accurate, updated, and appropriately structured replies.
—————————————
The above report is based on the RAAG-TAG Report titled Who uses the RTI in India and for What? By Amita Johri and her team. For full version log on to:
(Source: http://www.snsindia.org/raag-final-report-raag-applications-16-revised-may-2014.pdf)