Sanskrit in Aligarh Muslim University Since 1875

Islamic Voice 0 August, 2018 12:00 am
Mental Healthcare Crisis in Kashmir
Pandit Who Writes in Prophet’s Praise
Parties and their Perceptions on Muslim Issues 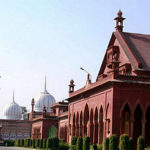 Aligarh: The Aligarh Muslim University (AMU) has been teaching since 1875 Sanskrit, along with other languages, speakers addressing the opening session of a Ten “Day Sanskrit Camp in the AMU campus recently said. “Since 1875, when Aligarh Muslim University was just a Madarsa, it has been teaching Sanskrit along with Persian, Arabic and Urdu languages”, Prof. M Zahid (Dean Faculty of Arts, AMU) said while speaking at the inaugural session of the Sanskrit Camp.
Organised by the Department of Sanskrit, AMU, in collaboration with Uttar Pradesh Sanskrit Sansthan (UP Government), Lucknow, the Sanskrit Camp was organised for the first time in the varsity campus. Guest of Honour, Dr Laxmi Kant Pandey, Basic Shiksha Adhikari, appreciated that the inaugural programme reflected the composite culture of the country in the form of recitation of Quranic verses as well as Vedic hymns. In his welcome address, Chairman of the Department, Prof Khalid Bin Yusuf narrated that such a camp is essential to propagate the richness of Sanskrit language and to create awareness among today’s generation on the need to learn, preserve the ancient language and its relations with Arabic, Persian and other languages.
(www.ummid.com)