By A Staff Writer
Hubli: 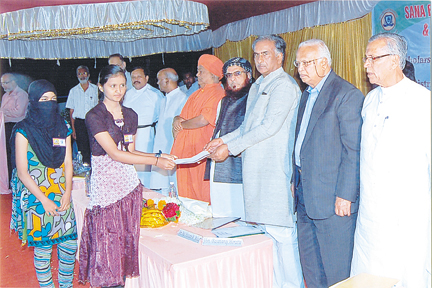 The Sana Educational and Charitable Trust and Sana Welfare Foundation gave away scholarships to 343 students, hailing mainly from districts in northern Karnataka at an impressive function on November 4 at the Sana Group premises here. A total of Rs. 11.29 lakh were disbursed by way of cheques among the students studying in high school and in various professional courses. Nearly sixty per cent of the recipients were girls. Around thirty per cent students belonged to communities among non-Muslims. Chief guest at the occasion was Jagadguru Dr. Tontada Siddalinga Mahaswamiji of Gadag Mutt. Maulana Siraj Ahmed Faizabadi of Madrassa Riazul Uloom was also present. Makhdoomsab Mohammad Husein Malagi, Chairman of the Sana Group of Institutions which runs several technical courses together with B.Ed, BBM etc said, the group has been working in the city of Hubli since 2001 and had been helping nearly 4,000 women in developing entrepreneurship through micro-credit. It was for the first time that they were launching a scholarship scheme to promote education. Cheques to the tune of Rs. 30 lakh were also distributed among 30 Self-Help Groups (SHGs) of women. Of the micro-loan recipients, 30 per cent were Muslims and 70 per cent non-Muslim women. Former minister, A. M. Hindusgeri, Janata Dal MLA Basavaraj Horatti, Anjuman Islam Hubli President, Abduljabbar Khan Honnali, journalist Maqbool Ahmed Siraj from Bangalore also spoke at the function. Dr. Abdul Kareem conducted the programme.