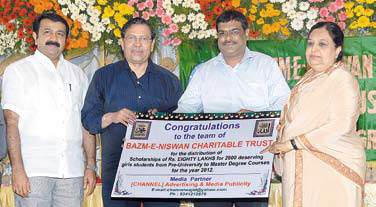 Bazm- e-Niswan. The leading Muslim Women’s NGO in Karnataka distributed scholarships worth Rs. 80 lakh among 2,800 girls on July 18 at Samad House functional hall. This was 38th annual scholarship programme of the Bazm which selects girls from underprivileged sections of the society. The courses range from PUC to post graduate degrees and professional courses such as BE, BUMS, MBBS, B. Pharma, Nursing and diplomas. Team Anna member Mr. Justice Santhosh Hegde who was the chief guest lauded the efforts of Bazm e Niswan in uplifting the Muslim women. He said greed had overtaken the need in the current society which has led to distortion of social and economic priorities. Mrs. Husna Sheriff, President of the Bazm chaired the function that attracted a huge gathering of Muslim women voluntary workers besides students. Ms. Hina Sheriff, trustee, presented a vote of thanks.